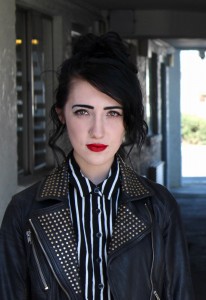 FEMMUSIC How did you become a tour manager?

AS: From an early age I knew this was the profession that I wanted to be a part of, so in High School I got involved with promoting and managing a couple of local bands. From there, I networked my way through college while studying Arts Management and Economics. I interned with some larger labels and venues in New York City to gain experience and knowledge in the music industry. I was able to secure an internship with So What Management, which manages a few artists such as Cydni Lauper, and got connected to Hunter Valentine through them. The band was looking for a tour manager for their national tour, and I was itching to get myself out on the road. With my experiences working with smaller bands as well as a few labels, they threw me in the van and my career began.

FEMMUSIC:  What are the biggest challenges of being a tour manager?

AS: There are many challenges that a tour manager faces. The whole job is a challenge. It is the tour manager’s responsibility to keep the entire tour on track and to keep the musicians as happy as possible. The biggest challenge I’ve had to face is learning how to take responsibility for something when it’s not your fault. You work with so many people out on the road, there are so many moving parts. You need to learn how to adapt to situations extremely quickly and not waste time putting the blame on anyone else. You need to keep your ego in check. Even if you plan the schedule out and get everything approved in advance, this industry changes so rapidly. As a tour manager you need to be able to adapt the plans on the fly to keep everyone on track and taken care of. No one wins if the tour manager is too proud.

FEMMUSIC: What challenges does being a woman tour manager present?

AS: Being a woman in this industry is challenging in itself, but being a woman on the road is even harder. Being a woman tour manager means you have to demand more respect from the people that you work with, where the respect would otherwise just be given to the men. I’ve also had to deal with sexist remarks, passes, and comments from those that I’ve worked with. I think you need to have tough skin in this industry, regardless of gender, but especially when you are a woman. You need to remember why you are there – to do your job to the absolute best of your ability, and to do that regardless of what anyone has to say about you.

FEMMUSIC:  As a woman in the music industry, have you been discriminated against?

AS: There are many times that I have been told that I couldn’t do something because I am female. I’ve been told not to lift gear because I am presumably too weak, I have been assumed to be emotional and ‘fragile’, and been told many times that I am ‘too young’ or ‘too pretty’ to be doing my job. Men also assume that you cannot be in a relationship because your life is too much to handle. People have also assumed that I sleep around because that is ‘the life of a woman on the road’. In an industry that is primarily dominated by men, it has been assumed that I do not know anything about sound, lighting, or technical aspects of the industry, and that I am just there to sell merchandise or be a groupie. My age and my gender have done nothing to help me get to where I am, but I think that makes me more proud of what I have been able to accomplish so far and more ambitious than I would otherwise be.

AS: The music industry is constantly growing and changing. In some ways it is progressing and moving forward, but in a lot of ways it is digressing. I think that more of the industry is centered around entertainment now as opposed to music. I have been fortunate enough to work with real musicians who really care about what they do and the message that they are delivering through their sound. However I have also worked with artists whose only concern is their social media presence. If I could change anything, I would want to shift the focus of the industry back to its roots – the music. It sounds like a bizarre statement, to make the music industry focus more on music, but I think we have been shifting away from the souls of the musicians and more towards the number of followers they have on Instagram.