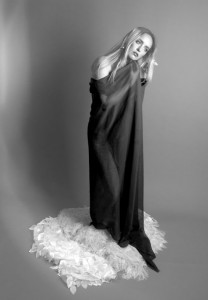 By Alex Teitz
MRK is Madison Renee Knapp. She is a creative force who caught our attention with both the song and video for “River of Blood.” The song is featured this month. She exhibits the risk and daring in songwriting that challenges and provokes. Instead of giving her a long introduction, we invite to read what she has to say.  For info visit http://cargocollective.com/mrklovesyou & https://www.facebook.com/mrklovesyou
FEMMUSIC: How did you get into music?
MRK: Music has been very much a part of my family life. I have either a great or a great-great grandfather who was a champion yodeler and many church singers and organists on both sides. From my Dad playing guitar to my Mother waking me every morning with a song to family sing-alongs to my brother’s impeccable taste in and knowledge of all tunes, I come from a musically enthused tribe.
Apart from being in choir and home movies of me performing songs as a child, it wasn’t until I was 16 and heard Patti Smith that I began doing acapella originals and reciting poetry in various get-ups. At 18 I started recording songs with a friend and became interested in the technical aspects of music production. I taught myself to play guitar, got my certification as an audio engineer and have been actively pursuing sounds ever since.
FEMMUSIC Can you describe your songwriting technique?
MRK: Improvisation is always invigorating. I am constantly jamming solo and recording into voice memos or GarageBand: I call it hi-tech/Lo-fi. From there I can parse out what I like and build around an idea or expand on it.
The other method I really enjoy for songwriting is piecing together sounds in the magical computer box. There’s so much freedom in technology! I love imagining the sound I want to hear and making it happen with infinite processing tools. When my producer Alex Arias and I co-write, we often toss around adjectives and try to match them with effects or samples.
FEMMUSIC: How did you find Records Ad Nauseam and why did you sign with them?
MRK: Records Ad Nauseam found me by way of Christina Elaine Vasquez, founder of Shezilla, and Luka Fischer (producer/manager/queen of all trades for Ad Nauseam and other entities). Christina came upon the MadAsHell (Leila Jarman/Mike Leisz) music video for RIVER OF BLOOD and contacted me to get involved with her Shezilla cabaret benefits. She then introduced me to Luka, who got me onto the label.
I put out my EP through them because they were the first to ask and because of Luka’s sincere appreciation and understanding of my work as displayed in the RIVER OF BLOOD video. Luka reinvigorated my confidence in the aesthetic I am building/want to build. The day my packaged CDs showed up at my doorstep all I could do was sob infinite thank you’s to Luka, MadAsHell, my producer, my family, everyone I knew who had helped put my songs into my hands as a physical object.
FEMMUSIC: What was the biggest challenge making the Blood EP?
MRK: Time, doubt and heartbreak were probably the greatest foes I faced. I had been in abusive relationships, faced a band breakup and 2 abortions; I spiritually and emotionally bottomed out a couple of times over the years it took to manifest these songs.
FEMMUSIC: Are there any experiences that stood out while making the Blood EP?
MRK: Writing RIVER OF BLOOD was an absolute turning point. Those words fell out of me like a prayer to myself and every time I see or hear them I remember the larger invisibiles coursing through us all; that no pain exists alone or insignificantly, that there is divinity everywhere.
In the beginning when I debuted SUN PIERCED BRAIN at my first MRK show at Cheetahs Club in Hollywood after 48 hours of writing and recording my songs to perform, I had a very surreal rock n roll experience. I was singing these brand new songs solo on a lit exotic dancer catwalk and my set ended with this gorgeous Latina jaguar-like dancer crawling over me. That was my birth as a solo artist and it was so feminine and powerful. I never knew the lady’s name, never saw her again, but she’ll always be a kind of totem for my journey. I’ll always have that rock n roll moment in the catwalk lights.
FEMMUSIC: The River of Blood video is stunning. How did it come about and how was the vision for it made?
MRK: The vision for RIVER OF BLOOD was a co-conception between myself and MadAsHell. We had both recently seen the film Hausu (1977) and knew we wanted to do something fueled by that imagery of the absurd sacred/profane, fear, delight and womanhood. Leila and Mike plotted out the scenes, focused the symbolism and we went for it. Everything in the video was made by our hands with our money and our blood. It was a very ambitious first project to do together, but their mastery and imagination put it all into place. The MadAsHell duo is the most fierce and forward-thinking team I’ve ever met and they weave my sounds into the visual field flawlessly. 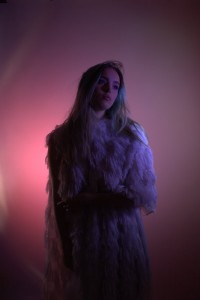 FEMMUSIC: As a woman in the music industry have you been discriminated against?
MRK: Absolutely. Although I have been very fortunate in my solo endeavors to work with wonderful people, I have been abused, belittled and shamed many times over other chapters of my musical lifetime.
From questioning my artistic input to undermining my technical advice to being assaulted by a band mate, I have indeed gained a lot of perspective on the treatment of women in music and in the world at large.
The most disheartening part of it all is that my experiences are not unique. I know this can change. I will always choose to work with and support my fellow female creators wherever, whenever, however I can. The latest phrase I’ve conjured in observing and experiencing female oppression is this: I forgive, but I do not accept. I forgive the history that has suppressed our understanding of each other, I forgive the people and systems perpetuating that history and its abuses, but I do not accept the harm it has done and is doing to us.
Even in a recent write up I was not really credited for my own work. I am slated as someone else’s brain child. To be sure, I have had the honor of working with some of the most talented people I’ve ever met and no one accomplishes anything alone–to achieve in a vacuum is no achievement at all. I am infinitely blessed with family and collaborators and friends without whom I would not exist or create as I am now. And thankfully, there’s no such thing as bad press.
There’s also this wonderful Yoko Ono quote on womanhood which helps me sneer back at the difficulties women in any industry face:
“…It’s so ridiculous, but also astounding – we have to always be apologetic about having created the human race.”
FEMMUSIC: What one thing would you like to change about the music industry?
MRK: I would change the colonization and capitalization of all artistic industries. The appreciation and gravity of art and music cannot be quantified, but the hard work that goes into it should be. I could wish for a meritocracy involving the level of dedication and actual progressive contribution of any given artist or piece, but even that is contradictory to the necessity of all expression.
In the current reality we’ve all chosen, I’d say that with the attainment of a certain level of success in music, regardless of genre or level of intellect, an artist should be required to contribute positively to society. This could be in the form of donations, promotion of thoughtful dialogues on important issues, opening schools, being politically active. It could be anything and it would be so fucking simple to do. If an artist has millions of dollars and/or fans, that artist owes the larger human machinery of the world which gave it birth and talent and luck enough to succeed to such heights. That artist owes the world love and compassion and the sharing of knowledge. That artist does not owe anything to the corporate structures which synergize the artist with edgy brand pairings and guest appearances–this relationship is already symbiotic and mutually beneficial if the artist is a scrillionaire. And if the artist speaks or acts in conflict with the “core values” of any of their backers and manages to change minds in a way that is not fiscally beneficial to said backers, well, isn’t that just the nature of the neoclassical economic beast? If corporations are to be considered people then they can fucking adapt.
Wow. Writing that did something to me.
FEMMUSIC:  Whom would you most like to collaborate with or tour with and why?
MRK: Bjork, Yoko Ono, Patti Smith, Tori Amos, PJ Harvey, St. Vincent, Gazelle Twin, FKA Twigz, Grimes, Erykah Badu, Warpaint, Die Antwerd, Arca, Yeah Yeah Yeahs, Sia, iamamiwhoami and Imogen Heap, if you can hear me, I’m yours!
All the above mentioned acts are deep sources of weirdness and inspiration for me. All of them, even the ones who’ve been around for a while, are artists I hold in the highest regard for originality, style, risk and sincerity. Extra points go to St. Vincent for overall show production quality. She creates a universe for your mind, guts and spirit when she plays. I dream of curating an experience on that level. Extra points also go to Imogen Heap for technological amazement. I would kill to play with her toys! Extra extra points go to Bjork because: Bjork.
I would also love to tour/collaborate with any of the Animal Collective folks, collectively or with their solo projects. Their music has redefined music for me and I’ve always considered them to be at the forefront of contemporary music. And I would like to add Prince Rama to the list, they are goddess chameleons of style.
FEMMUSIC:  What’s coming next?
MRK: I’ve got some very cute covers planned to roll out around Valentine’s Day and an original single release in late March.
Other than that, I’m writing the next album (titled FLOWERS), pushing myself into bigger and bigger curated music/art experiences with the likes of Puro Instinct, doing photo and music video shoots, appearing in a short art film by Leila Jarman and Chelsea Bayouth titled A DREAM OF PAPER FLOWERS,  conversing with mediums and psychics and spirits and animals and ancestors, trying to figure out how to connect my boss’s non-profit organization Women’s Health in Women’s Hands (womenshealthinwomenshands.org) with another non profit effort for women’s health in South America, learning more about flower and herbal magic, opening my heart and circulating and integrating with the universe at large by changing my life a little every day, dreaming, loving, being human and not.
February 1st, 2016