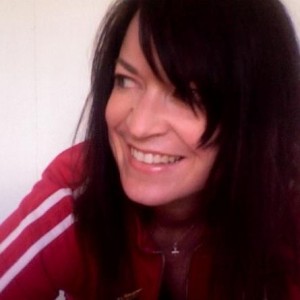 FEMMUSIC: How did you become a tour manager?

MJK:  I was always into music, even as a kid.  I remember at 10 years old, listening to Denver’s original concert promoter, Barry Fey, being interviewed on a radio talk show and saying to my mom “that’s what I want to do when I grow up.”   I naturally gravitated towards the local music scene.  I went to tons of shows & had many friends in bands & touring crews from all over.  It never occurred to me that a woman could be a tour manager until I went to visit a friend who was on tour with Mr Bungle in about 1992, at the Gothic Theatre.  During sound check there was a girl walking around on stage who clearly looked in charge.  I asked my friend who she was, and he told me she was the tour manager and that she was awesome.  I can’t remember her name, but she was responsible for the light bulb going off in my head with the thought “I didn’t know girls could do that” followed immediately by “that’s what I want to do.”    From then on, I just tried to do any kind of work on any local production, doing whatever I could to get my foot in the door.

In 1993, I got my first “real” job in live music production, working at a local production company in Denver, mainly producing music festivals for radio station clients throughout the west.  During that time I also worked as a production runner for Fey Concerts at Red Rocks, Fiddlers’ Green Amphitheatre and various other venues around Denver.   From those jobs, I learned what goes on behind the scenes to put a show together, production coordination, time management, & basic budgeting… the building blocks of tour management.

In 1996, Kevin Lyman took a huge chance on a kid he had never met before but who kept calling him asking if she could have a gig on the Warped Tour and hired me to manage the tour production office.  I worked on Warped for 4 summers & met tons of people  – many of whom now work with some of the biggest artists in the business.  It was a fantastic learning experience, and those relationships plus the experience I gained ended up being my stepping stone onto other tours.

Through referrals from people I met on the Warped Tour,  I was hired for several different tours as an Assistant Tour Manager.  It was through one of those tours that I got my big break and became a full blown TM.   I was hired as Asst TM  for Love & Rockets which was to start in early 1999.   About 5 weeks prior to the start of the tour, the label pulled tour support, and the asst TM position was cut to reduce the budget.  A Tour Manager hadn’t been hired yet, so the band’s Manager asked me if I knew how to settle shows and if so, would I be interested in taking the TM role?   I said “YES!” and immediately called a Tour Accountant friend to give me a crash course in settling shows. (because in reality I’d only ever settled one club show at that point)  I made it through that tour unscathed (gracefully, even!) and the rest is history.

FEMMUSIC:  What are the biggest challenges of being a tour manager?

MJK: I think the biggest challenge of being a tour manager – no matter what gender – is finding a balance of work & personal time.  The job of Tour Manager is very immersive, and part of the job entails putting a certain amount of your personal life aside while you’re on tour to focus on helping the artist’s tour run smoothly & ensuring their life is as seamless as possible on the road.  Like any freelance job, when you first start out in the touring industry, you try to get as much work as you can, which hones your skills. As you become better at what you do, you become better known & acquire more clients, which can keep you working consistently.   Constantly working coupled with the immersive nature of being a TM can lead to burn out – or even health issues –  if you don’t consciously fit in some personal time both on the road & off.  It’s a challenge but it’s really necessary to practice finding that balance early in one’s career so it becomes a habit.

FEMMUSIC: What challenges does being a woman tour manager present?

MJK: Being asked this question is quite often one of the challenges, to be honest.   This is a question that I really hope someday won’t be asked and it will only be “what are the biggest challenges of being a tour manager.”    First and foremost when I’m working as a Tour Manager,  I’m…a Tour Manager.   My gender doesn’t define my job or how I do it.

That said, there is one challenge I can think of which is 100% specific to being a Tour Manager who happens to be a woman: having your period once a month on the road which can sometimes be awkward!!  (like when you’re touring in Spain and the lady in the pharmacy hands you a package of earplugs because you forgot to pronounce the “m” when telling her you need “tampones!”)

MJK: Personally, I think I was pretty lucky.  I had a lot of great people, both male & female,  in my corner helping me out and me being a girl honestly never came into it.  I was just good at what I do.

FEMMUSIC:  What one thing would you like to change about the music industry itself?

MJK: I think that now that there are a lot more women in the touring world, the glass ceiling is cracking – however, I feel that as women gain traction at higher levels in the industry, the phenomenon of the “Glass Cliff” is sometimes coming into play.  (the glass cliff is a term that describes the phenomenon of women in leadership roles being likelier than men to be put in leadership roles during periods of crisis or downturn, when the chance of failure is higher)
I don’t know that anything can be done to change this – and lets face it, often times walking into a project that is high maintenance or disorganized and completely rocking that job can be a fantastic thing for one’s career (I’ve done it!!)     However, I think that simply having an awareness of what a job offer entails & that it might not be 100% altruistic or merit-based is a good thing for women to take into consideration.  Hopefully that awareness will eventually bring about change when those women are in a position to hire.