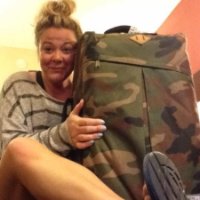 Name: Katie Haskell
Company/Organization: THE TOURING ACADEMY
Link: www.thetouringacademy.com
Bands worked with: Luke Bryan, Old Crow Medicine Show, Jason Isbell, St. Paul and the Broken Bones, Toby Mac, and worked artist relations for Bonnaroo, Hangout Fest, Pemberton, and Kaaboo Festivals.
FEMMUSIC: How did you become a tour manager?
KH: I kind of fell into the business. When I was growing up, I didn’t even know this was a job. When I moved to Nashville, I got introduced into this world… one thing led to another and was on my first tour in 2006.
FEMMUSIC: What are the biggest challenges of being a tour manager?
KH:I think the hardest thing is multi tasking and always being on call. I always try and make everyone feel like they are important in my day, but you can be talking to someone in person, while getting phone calls and texts, and being summoned on the radio, while emails are flying in. All of which can be “emergencies” to that particular person. So you’re job is to always maintain your cool in any situation and to make everyone feel heard and seen and taken care of in a timely fashion.
FEMMUSIC: What challenges does being a woman tour manager present?
KH: Unfortunately, as a woman, you do face discrimination and sexism. I have had many people say things like “Who is actually in charge?” or “I’ll speak to your boss.” or “Are you who is making our food?” You would think it gets easier, but it still happens and it still stings a little. The main thing is just to have people on your team who will go to bat for you and encourage you when you are having frustrating days.
FEMMUSIC: As a woman in the music industry, have you been discriminated against?
KH: Absolutely.
FEMMUSIC:  What one thing would you like to change about the music industry itself?
KH: What we are trying to do with The Touring Academy is to provide a place to train up the next generation well. There are a lot of people who get thrown out on tour out of desperation or because they are friends with some or any other number of reasons and they have absolutely no training. I wish there had been a place when I was starting out like this that would have provided me with the tools to be ahead of the game right off the bat. I felt like i was playing catch up and making it up as I went for the first few years.
February 1st, 2016