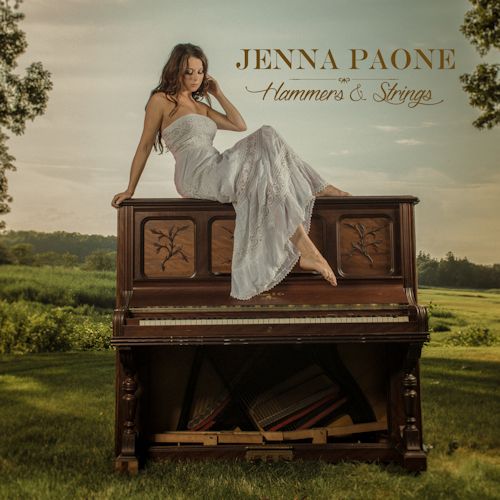 Ambitious, bold and maybe a bit crazy is one way to describe Hammers & Strings. An album is a slice of an artist’s life. It is a description of a period of time. Where most artists give you the intro to the story, Paone gives you the beginning to the end in fifteen songs. The songs are almost entirely about love and could easily be a soundtrack to a movie by themselves.

Paone’s opus was made by many people. The core band is Paone on piano and vocals, Samm Bahman on guitars (electric, acoustic, 12 string), mandolin, and glockenspiel, Kevin Connelly on bass, Hammond Organ, percussion and backing vocals, and Jon Francis on drums. There is also a string group and horn section which are too many names to put here but must be acknowledged. All the songs were written by Paone. The album is produced by Kevin Connelly and Paone.

Hammers & Strings is nearly a novel. The first five songs are love as imagined and as it should be. “The Dance” is a hit single. It is a fast paced pop song. From there “Prove It”, “Sweetest Sound” and “The Whole Night Long” caress the soul in blissful love. These are not sappy love songs but lyrical marvels that describe the feelings not just the words. They also bring in string arrangements that elevate the feeling. By the time of “I’m Still Smiling” the saccharin sweet has disappeared. The body of the album is a rollercoaster of lost love found in songs “Late”, “So Long” and “Not So Sad.” In these songs are horn arrangements and other special gifts.

The end of the album is slightly different. The title track is about a piano and gives it both voice in sound and meaning to the artist. “Got Myself A Gun” is a bold warning to past loves in a catchy song. “My Perfect Life” is not a happy ending to album on love, but a realistic one. The strongest songs are “The Dance”, “I’m Still Smiling”, “Got Myself a Gun” and “My Perfect Life.” These songs are pop songs with catchy lyrics and strong hooks.

Paone should be applauded for doing such a complete work. Where most albums end at nine or ten tracks, Paone delivers more. Heard in its entirety it is an adventurous painting of relationships. There are a few blemishes and the paint fades on some songs. Overall it is bright colors and stark emotions that should be heard as a whole, not in pieces. For info visit www.jennapaone.com