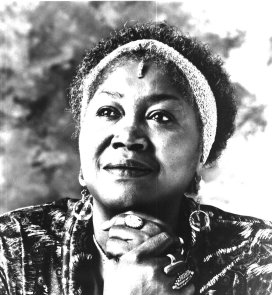 Odetta is “Queen of American Folk Music” and much, much more. She has been playing for over fifty years. In going through each decade of Odetta’s career one is struck by the high points. They’re all high. Odetta was active during the Civil Rights Movement and continues to be active today.

Her latest album, Blues Everywhere I Go was nominated for a Grammy in the Tradiational Blues Album category. In it Odetta sings songs about the W.P.A., TB, homelessness and other striking parts of history in America.

Odetta speaks thoughtfully and consciously. She is willing to say what needs to be said. FEMMUSIC is privileged to provide this interview.

FEMMUSIC: How has your music changed over time?

O: Well now that’s a deep philosophical question. As a person changes, so goes the music, and I suppose as you’ve changed so goes the writing. I think it comes along with what you’ve experienced, and what you’ve taken from what your experience is.

FEMMUSIC: What musicians have had the greatest impact on you?

O: I do adore hearing others perform, and I learn, I think, from every one of them that I hear or see performing. Since I was a teenager the impacts were Marian Anderson, a magnificent black women, concerto voice and Paul Robson, magnificent black man, berto bass  voice who was one who also politicized me. Since then I can not…I guess that I am so stubborn and hooked into finding out what is coming out of me that other people’s things don’t change it one way or the other. I’m encouraged by other people’s music and delighted by other people’s music but I don’t hear somebody and say, “Oh maybe I should change and be like that.”

FEMMUSIC: You perform a number of benefit concerts and donate a great deal of your time. Why do you donate so much of your time?

O: Well I have the feeling, as I say Paul Robson politicized me. It was through him that I found out that it was not only necessary, but possible to stand up for your brothers and sisters through the world, and to be responsible to them. Not for, but to them. To the world and population and I need to feel as if I’m either planting a tree or putting something back into the pot. I’ve been so fortunate through the time to put something back into the pot. Especially to soothe karma (large laugh).

FEMMUSIC: Along those lines you’ve been a fighter against discrimination and segregation. What is your view of both in the music industry today?

O: It’s alive and well, both of them, are alive and well. We’re still being stolen from. I was in England just a day or so ago and looking at the television and our artists here who have done…hip-hop, and with the dances and the moves, you know. All that has to happen is we as blacks invent something, and whites come up with a new idea by copying it. That sounds bitter, but what can I be when folks steal from you, and when people who invent it…It’s like the blues singers as soon as the great white hope comes along and sing these old blues singers’ songs, they get put out there. Not the blues singers, right? I’m not quite sure, how in the world, even with all the forgiving I can do, be happy with such a situation and it is still going. Let’s not pretend.

FEMMUSIC: You’ve been performing for a half century now. What challenges musically are you pursuing?

O: Am I pursuing?….Challenges. (thinking) Actually I don’t think of them as challenges, I think in terms of something else other than what I’m doing to go into, and also, define ways to connect what I was doing before with what I am going into. With the folk music the concern was the people history and within our schools we learned about somebody’s heroes and somebody’s heroes were not us as regular people. I’ve started finding out about the people in the United States through the music and stories that were collected while the music was being collected. Where in history books the heroes were all of those who stole from us, and who had the feet on our throats. The ones who made signs, “No Irish Need To Apply”, or signs in the South of Whites on a fountain and coloreds on another fountain. It was through the music, folk music, that I’ve started learning about the history and so when I go into the blues area, I want to take what I know and find songs that are other than, “I found you and you left me.” There’s a stereotyping around what it is put out as far as blues is concerned and I swear that we as community did more than “find you, fuck you, shoot and kill you” okay? We lost our jobs. The WPA came along and we lost our homes. The system has really been stomping on us for centuries. So I want to project what it is that our community has gone through.

FEMMUSIC: What changes would you like to see in the music industry?

FEMMUSIC: What advice would you give to someone just starting out?

I would suggest that they keep all those things in view and continue to hone the material your writing, your singing, your instrumental. Just continue to do that. Whenever there is an open mic or someplace you can perform, because we could sing in the shower forever and not really know how the responses would be, or how to adjust ourselves to people because, as we come into an auditorium, of people who have come from all over the place, even before we say anything, our personalities change because there are energies that we are responding to. We can’t see ’em, and we don’t ’em, and so just keep at it so that when someone points at you and says, “Uh-huh. I’d like to hear….” you are ready to go. Do not wait until you are discovered before. Have yourself ready, beyond readiness.

And also, I’ve met too many people who have blamed music for their being all messed up. And they’ve hung around people, and they’ve been the people who have done terrible things to their bodies, and had terrible experiences, and they blame the music.

I would also remind those who are starting the music, you got into it because it was healing, and never lose sight of the fact that you got into because it’s healing, it heals you, and as you keep your focus on that, what it is you do will be healing to others.

FEMMUSIC: What plans do you have for the future?

O: Well we’re going to continue with a combination of folk and my guitar and the blues. We’re talking seriously about our next CD as being Leadbelly songs. Wouldn’t that be exciting?

FEMMUSIC: That would be wonderful!

O: Yeah. Mark Carpentieri of MC Records. He was the one who asked me to do the Blues record which was right up my alley. I loved that idea. And then I was talking to him about what next? And he suggested Leadbelly, and I said, “That’s a brillant idea.” So we’re going to see about that.

And then further on down the line there’s a Jimmy Driftwood. Are you familar with him? He wrote tall tale songs. He was a history teacher. He would write these songs to keeps the kids’ interest in the history. He writes delightful songs.

And then further on down the line I have an idea about doing an all Pete Seeger and I was the first one back in the sixties to do an all Dylan record. That’s an RCA record. I don’t know if it can be found at all.