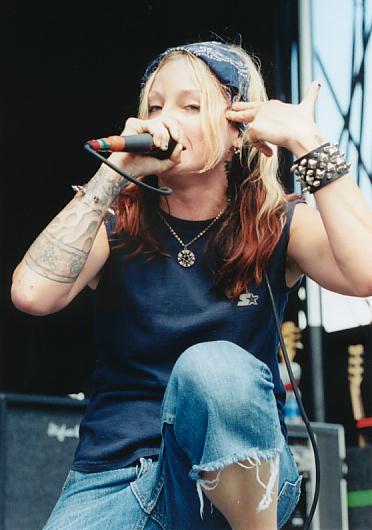 The world of heavy metal is not for the weak. Although women are more frequent in this realm than years before, there are few women found at the extremes. Otep is the glaring exception. For the past two years Otep has been the only female fronted band at OzzFest.
Otep is a four-piece band consisting of Otep, Rob, Moke and Evil J on bass. Otep’s lyrics are deep and probing but veiled behind Otep’s growling vocals and aggressive style. Rumors have begun about black magic and other extremes giving Otep a Marilyn Manson persona. Their first album, Sevas Traadds to this flame and mystery.
Beginning February 12, 2003 Otep begins a nationwide headlining tour. FEMMUSIC had a chance to speak with Otep in a brief e-mail interview before the tour began. Here’s what she had to say. For more information visit www.otepsaves.com

FEMMUSIC: What was the biggest challenge making the Sevas Tra?

O: To make it as real as possible …. without getting too personal …. so that the listeners could still identify …. and at the same time, feed my artistic needs ….

FEMMUSIC: What was the best experience making the Sevas Tra?

O: “Jonestown Tea.” It was painful, but I did it one take.

FEMMUSIC: How was it working with Terry Date? What did he bring into the project?

O: Terry is unbelievable…. He is a guru … He empowered us to believe in ourselves … and trust his instincts…. He was the 5th member of our band…. 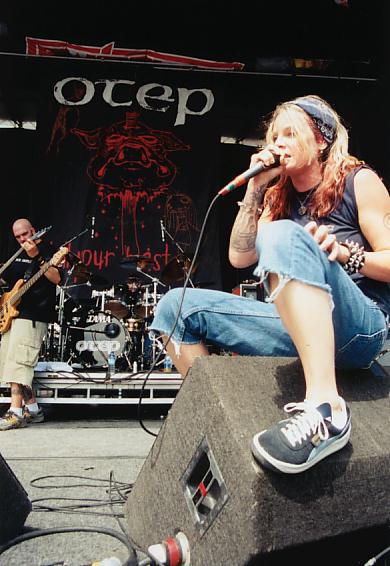 FEMMUSIC: What are you most looking forward to with this tour?

O: We are still searching for that perfect moment on stage…. When nothing else exists … except joy and pain…. and all the secrets of universe are revealed…. Maybe this time.

FEMMUSIC: What three things would you like to change about the music industry?

O: 1. They would fire all the “suits” & start hiring creative people. 2. Artists had more control over promotion and marketing [how, who, where, etc.] 3. Sign REAL bands instead of all this mundane bullshit

FEMMUSIC: What artists are you listening to these days? 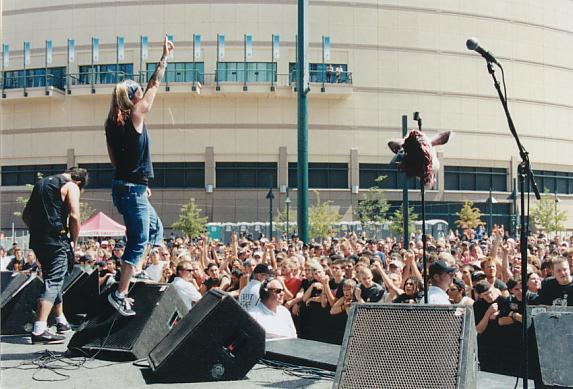