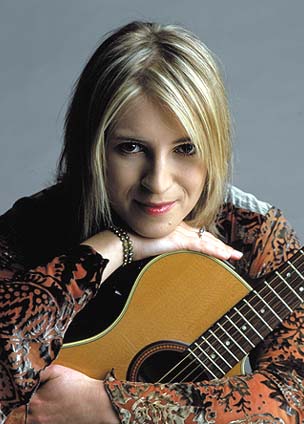 Since FEMMUSIC’s 2002 list things have continued to stay busy. She recently signed a management contract with Stiletto Entertainment and another publication gave her praise. Mara is originally from New York and has played extensively internationally. Mara music is strong and compassionate and her vocals are unique in this world. Mara’s CD is called It’s Who I Am and should be part of any CD collection. For more information visit www.marasong.com

M: I generally come up with a line or an idea first and develop that into lyrics. The melody tends to come along with the lyrics as I write them. I don’t even touch an instrument until the song is pretty much finished. I sometimes don’t even write it down until it’s done because I’m usually
driving in my car or walking around when inspiration hits.

FEMMUSIC: What was the biggest challenge making your latest album?

M: Since this was my first full album and I didn’t hire an outside producer, the biggest challenge was to know when it was done, or should I say, when I should stop working on it. I believe that an album is a portrait of where you are as an artist at the time. Your point of view changes every
day, and if I were to have the album reflect every one of those views, it would NEVER be done! Eventually, you just have to let it go and speak for itself without you behind the controls.

FEMMUSIC: What was the best experience(s) making your latest album?

M: I loved making this album. As an independent artist, I had total freedom to make it be whatever I wanted it to be. The best part was getting a live string section. I had wanted to use live strings on earlier recordings, but my producers and engineers would always say, “You CAN’T have live strings. They’re too expensive and the keyboard is just as good.” Well, it was never just as good, and Curt Piar at Proving Ground Studios where I did this record found a way to hire and record a live string section on an indie budget. I’m sorry, but there is NOTHING like
having a live cello with a live cello player to interpret your songs. Don’t settle. Get the real thing.

FEMMUSIC: Who are your biggest influences?

M: I grew up with musical theater, and I think that has influenced my writing a little. Vocally, my influences vary from Shannon Hoon from Blind Melon to Sebastian Bach from Skid Row. Musically, I’d say Counting Crows, Indigo Girls and Melissa Etheridge.

M: Maybe I’ve just been really lucky, but I have found just the opposite. In Los Angeles, there are lots of supportive networks for female musicians who book shows together and share fans. I’ve never felt that a club booker even noticed my gender unless they were having a theme night
for all female performers. Even when I go to music conferences and network with people on the business side of music, I’ve never noticed a problem.

FEMMUSIC: What three things would you like to change about the music industry and why?

M: Despite what you will hear about the state of the music industry, this is a great time to be an independent artist. Never before has it been as easy and inexpensive to record and distribute your own CD while touring around the world selling it. But, you have to love what you are doing.
You have to have some tolerance for the business aspect of things or find someone who will do that part for you. Concentrate on writing the best songs you possible can. Listen to the radio a LOT and make sure your songs are, not just as good, but better then your favorites. The
industry may tire of fads and faces, but they will always need good songs. Don’t give up. Ask for help. Everyone started somewhere.