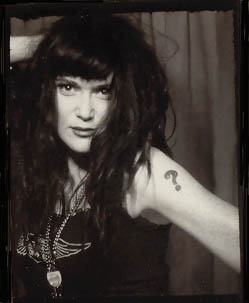 There are few names in music that reverberate as strongly as Exene Cervenka. Exene is the founder of X, the band that shaped punk and rock in the 80’s. Cervenka is a poet, writer, producer and has written about the history of punk. She is the overpowering mind of creativity and doesn’t stop.
FEMMUSIC interviewed her last year regarding her new project, The Original Sinners. This project includes a variety of humorous and challenging songs as well as instrumental pieces. Exene tours with both The Original Sinners and with X. For more information visit www.exenecervenka.com

FEMMUSIC: Can you describe your song writing technique?

Ex: no, there is no technique. That’s my answer.

FEMMUSIC: Well, How do you form a song within the band?

Ex: Well I write the songs whichever way they want to get written. Sometimes I write a song, the words and music at the same time just off the top of my head. Sometimes I write words and spend a long time putting music to it, it just varies on the more inspired you are, the easier and faster it is for sure. And sometimes it is an intellectual pursuit and that is a little more work.

FEMMUSIC: What was the biggest challenge making the Original Sinners album?

Ex: Um, the biggest challenge which is always the same challenge, getting everyone to do what you want them to do. Um, sometimes you know when you are making a record, one person or another whether it is the engineer or someone in the band, or someone in general, or even just yourself sometimes will have a problem getting it across the way you hear it or emotionally the way it should be represented. Sometimes engineers tell you they can’t do what you want them to do, they are like,”Oh we can’t do that,” and I’m like,” Why not?” So that’s what’s hard. But otherwise, it’s pretty easy…

FEMMUSIC: What was the best experience making this CD?

Ex: Um, having control. Being able, I dunno…if you are thinking of the incident that was the most fun or something? We worked so hard, we worked so fast, that it would be hard to say there was this one night when we… no it doesn’t work like that. I guess the best experience was just feeling like I had accomplished 90 percent of what I tried to do.

FEMMUSIC: And what was your goal with this album?

Ex: Um, I’m gonna have the same answer to all your questions. Um, I didn’t have an end result goal like sales or reaching a certain audience or anything. I don’t know if I really had a goal, I just wanted to get these songs across the way I heard them and get the emotional part down. It’s really hard to have a goal with a record because its really unpredictable once you are done with it. Its just kinda out there once you are done with it and you hope people hear it but you can’t really count on it. So..I dunno.

FEMMUSIC: All right, the album is extremely diverse. I found it interesting to hear the instrumental parts within it as well.

Ex: Yeah, well, we just thought that’d be fun. Oh god, I am so bad today. The instrumentals are something I want to keep writing. I wrote one, there are three on there, and Sam wrote the other two. And I think that that’s really fun music. I just love listening to those songs. They don’t have words but they have a certain personality to them that just gives you an idea about what they are about, I think. But um. I want to keep doing that more. I like instrumental music.

Ex: As a women in the music industry, have I been discriminated against? Um, when I started out, it was such an easy time for women to be in music because all the doors were open to anybody that was like creating spontaneously or doing something original. It didn’t seem like there was any prejudice in punk rock at all to me or to anybody and the weirder the better. The more the extreme the better. There were a lot of women performance artists that were very well respected. And women musicians that were very well respected. And I think that now its got a lot lot lot harder for women. Kind like a big backwards leap, to me, with what is going on with women now. As far as me personally because I was married to John Doe, we were kinda taken as a couple. All the things that kinda came to us, I always took as if there was kind of an equality there. But when he and I split up I did notice some sexism there definitely. And I have noticed it a lot more lately. But you are also having to deal with ageism in the music industry. So which is which, if you are a gay black men who is 54. What’s the prejudice? Same as with an older woman. It’s hard to know if it is sexism or ageism. Or just not your time in general as an artist. Or is your time. I dunno…it’s hard to say.

FEMMUSIC: What is your view on how punk and rock has evolved in the last 10 years?

Ex: Well, I don’t think punk or rock has evolved in the last 10 years. And as far as punk rock, it’s hard to say, I believe there is still an ethic to it and a musical style that is still around. I have a problem with things being created within the space of a few years, and then people who are younger that come along now that still call themselves that, dress like that and act like that. I just think its odd. Because if the people who created punk rock felt like that there wouldn’t have been punk rock there would have been more hippie music. I dunno. It’s just kind of dragging on and on and on. Maybe its evolution, I don’t really know.

Ex: What one thing would I like to change about the music industry; it’d probably be the music.

Ex: Well, I’d make it good. If I could change it, I’d make all the music be good. More new and exciting and creative and smart and inspiring and inspired. And I wouldn’t care too much about the music business it self because that is something that if you think about at all it just ruins your ability to be creative. The music business is just what it is and it’s a vehicle to get stuff out. And its really corrupt and it rips everybody off and it stifles people and all that. But it doesn’t really matter because there have been times when the music business has been really stained and really horrible and great music has been created. Its not really culprit, I think its the people making music.

FEMMUSIC: What advice would you give to someone just staring out?

Ex: Advice to someone who is just starting out…I would actually say for them to find all the people that they can think of that they have access to who are veterans of the music business or artists, even if they are painters or dancers or musicians, who are older. And I would ask them what they would do differently, what mistakes they made, what they are most proud of. And I would try to get the benefit of someone else’s experience and ask those questions because those are the people that you can learn from. And I would take very seriously all their advice.

FEMMUSIC: Can you think of any artist that you can see now that has asked you that?

Ex: No. Nobody has asked me any advice I don’t think. I think especially, it is very confusing when you are in the middle of doing stuff. Whether you are on a major label or not or whatever you are doing, its very confusing to have perspective on your own stuff. I also think that people aren’t blunt enough when they give advice. They should tell people what they should do differently, be more honest…but it’s hard because you don’t want to hurt anyone’s feelings. But no, No one really asks me those questions.

FEMMUSIC: I still remember Janice Ian’s response to that question and that was, “What advice? “, “None. Don’t get in it at all.”

Ex: Don’t get in it at all. Yeah, that’s answer B, is don’t. Yeah get involved in the business side so you can make a living. But that’s a more cynical. If someone wants to be a musician or an artist, they should, they know that the outcome is gonna be bad, that they are not gonna make any money and they are probably gonna give up at some point. But they might make great art and they might be really fulfilled by that so they might as well give it a try. But the other thing is as far as advice that is probably a bit more applicable, is to create in somewhat of a vacuum, and to not to get involved in what other people are doing and current trends, and the wisdom of people that…like when I said get advice from people who are older or have been in the arts for a long time, sometimes people get advice more from their peers. So their wisdom is more like what is happening now, what we should do to get famous kind of advice, and I suppose that is valid. But I think its better to create in somewhat of a vacuum and be very original and ultimately that is more rewarding and that is what stands out in the end.