By Alex Teitz and Karen Weis 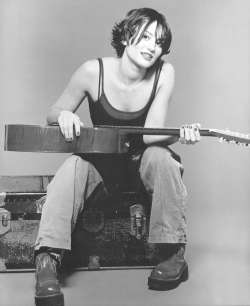 Martina Sorbara is a young musician with incredible talent and abilities whose debut CD, The Cure for Bad Deeds, has attracted attention in both the US and her native Canada. Sorbara plays both piano and guitar and is known to make her own guitars and clothes. Her CD was produced by Jian Ghomeshi, better known as a member of Moxy Fruvous. The CD is pop and rock with a number of jazz influences and strikes the listener with both it’s style and lyrics. For more information visit www.martinasorbara.com

MS: My songwriting technique. Words and phrases kind of come to me and I walk around with them in my head for a while and try them against different riffs or chord progressions I’m playing around with on piano or guitar. But most of the songwriting actually goes on while I’m just hanging out. Walking around, driving. That’s where the real stuff happens. If it works with the music, then I keep it. (laughs) Or it disappears somewhere. Gosh, if there was a real recipe then I would probably…if it was just like this recipe I could pull off the shelf, then I would write a lot more songs. (laughs)

FEMMUSIC: What was the biggest challenge making Cure for Bad Deeds?

MS: Well, it was my first recording that involved other people. Other musicians, other opinions, and a producer. But that was kind of easy and exciting. I think that in the studio even with all its excitingness, it’s not my favorite place to be all day long, every day. And I find it hard sometimes to muster up, I found it hard sometimes to muster up the excitement after being there for a long time. But other than that it was pretty easy, especially with the musicians I worked with, cause most of them were all friends. And Jean is my friend, so mostly it was smooth sailing, aside from a couple fights (laughs), differences of opinions. That’s actually also the best part, the differences of opinions, cause I think that’s what you have a producer for, for some objectivity on your songs, you know? But that’s not really talking about the same question you asked. (laughs) I don’t know. I never got asked that question before. It wasn’t really challenging. Well it was challenging just in that I’d never done it before and I had to call upon a different part of me. But l’m totally looking forward to making the next record, that’s for sure. Which I don’t know when that’s going to be, but sometime in the next year, I guess.

FEMMUSIC: How was it working with Jian Ghomeshi?

MS: Excellent. Like we just have this super-close and open relationship, like we have a friendship and then we have this business relationship. It’s getting easier and easier for us to slide in and out of being friends and then being business associates. And then you put those two together and get creative partners. And yeah, it made it easy that I had known him for a long time, and he knew me well enough not to produce this weird thing that wasn’t me. I’d worked with producers before, with a development deal with a record company from my past, and I just came out of it with these songs that sounded good but were not me at all. And I wasn’t even afraid of that working with Jean cause he knows me and he knows my stuff, and he had a lot of good stuff to add to it.

FEMMUSIC: What was the best experience making the album?

MS: I think first of all getting these musicians that I’ve always like just revered in the Toronto music scene and having them: a) agree to play on songs that I wrote, which was like, “WOW! Holy shit! You’re going to play with ME?” and then hearing like them coming into the studio and being inspired by the song and playing something great. I remember when Dave Matheson of Moxy Fruvous came in and he played on “End of the World” and he just played so beautifully and I was like, “Wow, that’s my song, and he’s playing it and making it sound awesome!” Every take was better than the last one. I was like, “WOW! This guy, he’s playing with ME! Playing those chords that I wrote?” (laughs) I think that was the best experience and that’s what I’m looking forward to next time I record because I keep on meeting these excellent people who I totally respect musically and who I think respect me and hopefully I can play with them in the future. I’ve been hanging out with Danny Michelle a lot. He’s a Canadian dude. I tried to get him on my first record, but he wasn’t around. He’s pretty good.

FEMMUSIC: How did the deal with Nettwerk happen?

MS: I was actually opening for Danny Michelle in Vancouver and I was in negotiations with Sony Music Canada. But someone from network was at the show in Vancouver to see Danny Michelle and then they saw my show. And then my lawyer heard from Terry McBride of Network and Terry was just like, “Well, what’s going on with Martina, and who is she?” And my lawyer said that I was in negotiations and I’m spoken for. But then it was kind of exciting having another record company. We listened to what they offered and everything was better and less intimidating than the Sony Music deal. And so we went up there and met with them and I went to their offices and they were so comfortable and open and good that I ended up signing with them, instead of the other option. Which I’m really happy about. It was all such a surprise too. It wasn’t like we had pursued them, just that they had heard me and heard the record. And the greatest part of it was that me and Jean had made this record for relatively cheap and just made it to sell independently, and they liked the record enough that they didn’t want me to go into the studio again; they wanted to sell the one we’d already made. We didn’t have that kind of plans for it, really.

FEMMUSIC: The next question I have is about some of the stuff that you’re doing outside of the music itself. I was very surprised to hear about you building guitars.

MS: I do that a little bit. It’s just for me and it’s just for fun. I play my guitars all the time. I have three that I’ve made. One day I’d like to make them for other people, if I ever get any kind of reputation. If anybody ever plays one of my guitars and says, “I want one of those” then I’d love to whip one up for somebody. “Whip one up” isn’t exactly the term, but….it’s almost like meditation for me. It’s a place to put my energy. The reward is so big, and good. I love crafting. I’ve always had trouble calling myself an artist. I always thought that sounded weird, and not me. And then I realized that I’m a craftsperson instead of an artist. I make a lot of clothing, but I don’t…I would never draw a piece of clothing and then get someone to make it. I like sewing it and going through the whole process. It’s just about using my hands and my head and seeing what comes out. It keeps me alive. If I’m not making things, I’m a pretty big bitch. (laughs) I need to keep myself satisfied like that, otherwise I don’t have anything to give anyone emotionally or anything. I’m just kind of vacant. (laughs) if I’m not immersed in something.

MS: I don’t think so. I think I’ve been really lucky. I think it’s a very advantageous position to be in, being a woman in music. There are times I feel that the boys, the jamming guys, aren’t ready to just dole out respect for guitar playing, piano playing female singers. And I think it takes more to earn respect, and that’s kind of frustrating sometimes. But besides that, I don’t think it’s that…it’s getting easier and easier to be a woman in music and that’s because probably there are role models for girls that are women now, more than ever.

MS: I don’t know what I would change. I haven’t been dicked around that much and it might just be because I’m so naïve, I can’t tell. I’ve had to really easy run of things as far as music industry relations go. I’ve met great people and I trust most of them. So changes, I don’t know. I wish that the music that was presented in pop culture represented more accurately what everyone is listening to, instead of the big money makers. You get this tiny little window of what pop is right now just because of money basically. So I wish tat radio and video and that was more accurate and more wide and wasn’t so discriminating against the fringe of it. That’s what I would change, but I wouldn’t know how to do it. (laughs)

MS: Just to play. Always. It depends on what kind of artist that artist wants to be. My goal was always to just have an audience to play to and one day be able to sustain myself and make a living at it. My advice would be to play always to whoever wants to listen, and keep learning new things. Just from whoever is going to teach you anything, learn it.