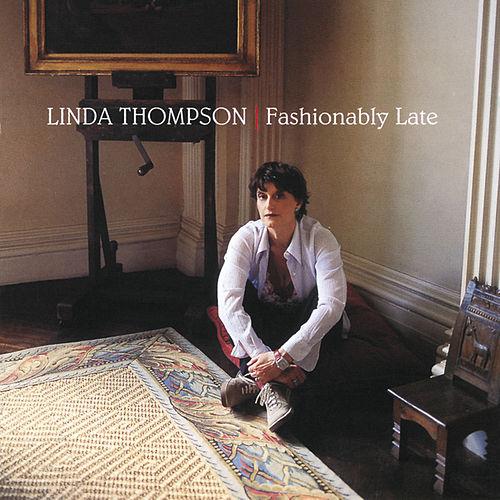 *Fashionably Late* is an appropriate title for Linda Thompson’s first recording in approximately 17 years. After a bitter divorce from husband and singing partner Richard, she suffered for years from hysterical dysphonia. Basically, had she had been an actress, her condition would have been called extreme stage fright. She simply couldn’t sing. However, years later, she has recovered in more ways than one. Her voice is back, and past feuds with Richard Thompson seem to have been settled. While both Thompsons are now married to other partners, Fashionably Late features both her ex-husband and their children, Teddy and Kamila.

Known as an up-and-coming singer/songwriter in his own name, Teddy Thompson has become his mother’s musical partner on this album, sharing co-writing credits with his mum on six of ten tracks. (Other tracks include songs written entirely by Linda Thompson, a beautiful ’40s-style number Thompson co-wrote with Rufus Wainwright, and a cover of Lal Waterson’s “Evona Darling.” On that latter number, however, Linda and Teddy sing together; their voices blending as easily as their writing.) The generations speak well together with songs that reflect Linda Thompson’s legendary handling of folk songs; it’s the vocal power that gets the point of the song across. The material is not upbeat and bouncy; it can be mournful and reflective, accusatory and somber.

“Dear Mary,” the opening track, has a slight hint of Appalachia to it, blending Thompson’s British roots with Americana. There are five Thompsons on this track: Linda (lead vocals), Richard guitar, backing vocals), Teddy (guitar, backing vocals), and Kamila (backing vocals), along with Danny Thompson (no relation) on bass. These Thompsons are not the only guests on the album, however. Kate Rusby sings backing vocals on the sad tale of “Miss Murray,” and also provides vocals and guitar on “No Telling.” An original Thompson song, its slow pace and ballad-like storytelling, as with many of her compositions, make it sound as if it could be a traditional song. Rusby’s buoyant voice contrasts nicely with Thompson’s earthier tones. “Weary Life” is a lighter tune, a dark comedy on which Eliza Carthy offers fiddle and backing vocals. Kathryn Tickell contributes Northumbrian small pipes on “The Banks of the Clyde,” a lament from a broken woman’s wish for home, a song Thompson wrote for her brother.