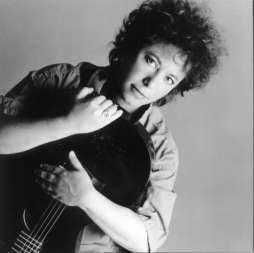 After a glowing welcome from Swallow Hill staff, Janis Ian took the stage already strumming a wireless guitar. She started with the haunting, “Stolen Fire,” and the audience was silent as her voice effortlessly filled the room. At the end, she lightened the mood, warning the audience of an impending sing-a-long. Obviously a veteran in front of a crowd, she kept the audience laughing between sad, sweet love songs and biting political commentary.

She told the story of how she went on Howard Stern’s show, and what a sweet, polite guy he was until they went live. Fortunately she was just as quick on the draw and could match him jab for jab. Then she played “Society’s Child,” her 1967 controversial interracial relationship song, to appreciative applause.

She proceeded “Boots Like Emmy Lou’s” with a hilarious story about a discussion with Chet Atkins where he laid out exactly what needed to be in a hit song so she could make a lateral move into the country scene. Winking and including the audience in each pun as she played, she turned her powerful guitar into percussion, lap steel, and fiddle. The raucous applause lasted nearly a minute and she beamed at the crowd.

The slow, introspective “Mary’s Eyes” was written in Ireland while touring with Mary Black. The song did not make it onto her latest CD but has been popular in her shows. She sang the Celtic flavored song with a convincing Irish accent.

She described “The Other Side” as a song written before it had meaning, and as the story of a fallen firefighter unfolded, it was obvious it was “given to her,” as she says, before the events of September 11. Her looping technology allowed her to harmonize with herself in a powerful ending.

She opened the second set with “Jesse,” barely a whisper of a song, and kept the pace slow for the next few songs. Again lightening the mood, the outspoken Jew from New Jersey described a song she wrote with a friend that criticized modern Christianity and dared Amy Grant to record it. Ms. Grant took her up on the offer, recorded “What About The Love” on her album Lead Me On which went platinum, and Janis had a new crowd of young Christians who left each show shell-shocked.

She wound a few more good tales then cut into “At Seventeen.” The applause would not stop as she thanked the audience for the privilege of being able to comfort them in hard times, harbor their dreams, and make magic. She then showed off her technical proficiency and creativity with a long guitar jam in the middle of “Take No Prisoners,” mugging for the photographer and interacting with the front row. Strains of Jimi Hendrix and fancy pedal effects prompted laughter, and at the end the crowd rose to its feet. She hid backstage for a couple seconds then reemerged and triumphantly said, “Some nights you wish you did actually finish high school, but tonight was one of them!”

The sing-a-long turned out to be “These Boots are Made for Walking,” continuing the country theme, and the audience responded enthusiastically. The evening went by very quickly although she played for nearly three hours. She vowed to autograph CDs after the performance, again underscoring how important her fans were to her.