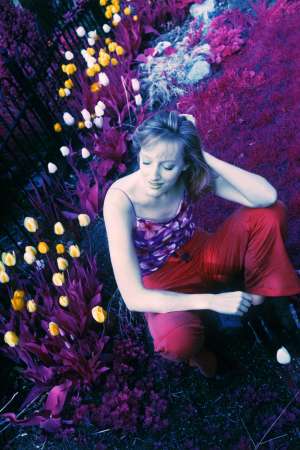 Marcy Baruch has learned the lessons of being a singer-songwriter and bandleader. Her new CD, Clearly, is a work of genius and art that should be known nationally. Baruch speaks from the heart with her songs on everything from family and love to even the simple, “Thank You.” For more information on visit www.marcybaruch.com

FEMMUSIC: .Can you describe your songwriting technique?

MB: People ask me that often, usually in the form of “Do you write the lyrics or the music first?” There are times where I wish I could be that compartmentalized in my approach, but it has never worked that way for me. Usually, the process is not one where I’m just completely inspired and out comes some blob of a song that I decree should never be tampered with, so help me God. On the flip side, the process is also not one where I have such expectations of where it should land ultimately that the life and the authenticity of its becoming are killed before it even begins to breathe. There are choice moments along the spectrum from which every song in its uniqueness will draw as it takes shape. Within my style (a pop-folk blend) and taking into account that my deeper feeling of why I write has to do with connectedness, the “excellence” mark for me is hit when something powerful has been communicated because it has been crafted well. THE PROCESS: I tend to have a lot stewing in my brain at any given moment, usually in recurring themes or observations about life that seem to be a part of my relatively immediate experience. I also sit at my piano, my guitar or the speakers in my car and hear things that suddenly jar me into a writing mode because something intriguing has just struck me and has catapulted me onto a path where it feels like something very integrated wants to emerge. A lot of times, I have a tape recorder near by. Sometimes it’s a matter of learning a new tuning on guitar and carving out time to swim in the possibilities for a while that leads to some great lines that end up being the start of my next song. Whatever the initiating event of the process, there is always much repetition and trying on of phrases, really liking a phrase and deciding that it’s important to keep it, but that now the chord needs to have a slightly different flavor… The elements all have a place; cadence, word choice, chord progressions, melody, hook, overall verse-chorus-bridge structure- there is the process of crafting that is important to respect. Part of my own process is leaving a lot of room within that for the pieces to find their right place. Ultimately, it’s like a painting. You may start with some color and a type of brush stroke and as you walk away and come back, you are as affected by it as it is by you and that back and forth-ness is the beauty of the relationship. Appreciation for that dynamic and responsiveness to it held up to a standard of having something well written from a technical perspective at the end is probably the governing principle of my writing most of the time. Other times I just don’t need to be that serious about it and something can work beautifully for other reasons entirely. The artist gets to define the parameters.

FEMMUSIC: Who have been your mentors and influences?

MB: Every teacher I ever had who saw my gifts and expected excellence. Other influences- Amy Grant, for how she has navigated honestly through every phase and changing context of her musical/public/private life and for being, truly, my first experience as a young girl with the deeply connective power of music on a personal level… Shawn Colvin, for persistence, for word pictures and for brilliant, revealing, gutsy songs- especially those on her album, “Steady On”… Sinead O’Conner for standing on a stage and reminding me that a voice, unadorned and hard fought to find its strength and its forgiveness, is still the most powerful and beautiful sound in the world… Lyle Lovett, Aimee Mann for rootsy cleverness in lyric writing…Karen Peris and Don Peris (of The Innocence Mission) for ethereal, brilliantly precious lyrics, the frequency of her voice, melodies, arrangements and Don’s guitar work that all has such incredible synergy… Peter Himmelman for his ability to take an audience on a journey from unapologetic, high-energy rock to bare-bones, stripped-down, “Who are we at the core” quiet and then all over the map again… The Indigo Girls for harmonies, lyrics and for using their music and their voices to effect justice and change… Sarah McLachlan, Tori Amos for what they have done for women in music… Mr. Gharibian and Dr.Busarow (my high school and college choral directors) for being impatient with anything but perfection and for insisting on the importance of LISTENING…Gloria Steinam, Oprah Winfrey, Lisa Simpson…

FEMMUSIC: What is the biggest challenge of being an independent artist?

MB: The biggest challenge of being an independent artist, right now, is dealing with the constant feeling of never knowing quite how to navigate exactly through the maze of structureless-ness and arbitrariness that pervades many circles of the industry. As an artist, I work to create songs and performing environments of beauty and purity because that is where I want to connect with people who feel drawn to what I do. The 90% of what it takes to get to that moment sometimes feels antithetical to the intention… In my heart of hearts, I don’t give a rat’s ass about “creating a buzz” and plastering myself all over telephone poles. The whole hullabaloo strikes me as inherently goofy, and goes against my grain as a human, and yet, I understand the necessity…

FEMMUSIC: What was your best touring experience in 2001?

MB: My best touring experience in 2001 was driving from Denver, Colorado to Dubuque, Iowa, playing for half an hour and driving back. Dar Williams has a song called “Iowa” where she says, “I’ve never had a way with women, but the hills of Iowa make me wish that I could.” I had the CD in the changer, ready for that moment of nostalgic transference that would soon become my own moment as well, but I guess Dar must have been in a different part of the state. We did pass a rather expansive and ultimately enticing lawn ornaments store, however…

FEMMUSIC: What was the biggest challenge of making your latest CD?

MB: The biggest challenge of making my latest CD, Clearly, and one I believe I have overcome, was a personal one. Ironically, the challenge has been learning to keep the personal out of it all. You do nobody any favors at all in keeping them on a project or a song when it’s clear they have contributed to their highest potential and it’s still not hitting the mark. I tripped a few times into that puddle of the “feel good, trying to be caring toward everybody” thing and letting that supercede decisions being made only as they related to goal-related caliber. I cost myself a lot of time and money and wasted brain gerbil-wheeling. If it’s not working, get rid of it. Check. I’ve got it now.

MB: Music is for people. People have tremendous power and music has always been a part of anything that has ever been authentically worthwhile in the ceremony and ritual of human experience. That popular music now comes from the top of the corporate structures down instead of from the experience of people being moved out and up, is a perversion of disgusting proportion. The balances are way out of whack. As a sideline of this same phenomenon, music’s being cut out of schools and so poorly funded in society in general while money continues to be thrown into how-many-more-sports-channels-do-we-need craziness is just one more reflection of how our society devalues the power of the arts and our need to be connected on deeper levels. I would like to change some of the ratios and the balances… Locally, I would like more venues in my own town, Denver, to support songwriters and performers for the work they do and for the crowd response to the artist as opposed to making the artist’s job “Bringer in of beer drinkers.” I understand the components of the problem and there certainly are a number of towns where people pay eagerly for the privilege of listening. I’m not talking industry towns. I’m thinking along the lines of Philadelphia, Boston and a few others where considerably higher value is placed on performing songwriters and venues that are conducive to this form of entertainment where people pack the places. It would be very cool if that were the norm everywhere and if the tide could turn in a more widespread fashion.

MB: To say that I haven’t been discriminated against would be naive because it’s just part of the societal landscape and no one is immune. There is nothing blatant that comes to mind, however, in a music context although in a life context, most certainly. I do know that the smarter a woman is, and the more she gives herself permission to know what she is talking about, the better equipped she is to lead a particular kind of interaction proactively. If you’re dealing with manipulators, they’re going to be that way no matter who they’re dealing with; the bag of tricks just might be different for a woman because of their assumptions about what that means. We all, no matter what package we come in, have to identify those people and get smarter about getting to the other side of their game and realizing that’s all it is and not getting caught up in victimhood or any other personal kind of response. You just waste time letting it become personal. I know from all my experience of getting stuck! Deal with it as a dynamic. There are some things, FEMMUSIC’s devotion to emerging women in music’s being one of them, where my being a woman has worked to my advantage.

FEMMUSIC: What advice would you give to a woman artist just starting out?

MB: Know Thyself. Practice, practice, practice so that you are enough for yourself and so that you don’t make choices from places of dependency. Quit apologizing and smiling except for when those moments of real joy overcome you or when you can own your own mistakes without taking on the ones you have no business incorporating. Above all else, keep going.