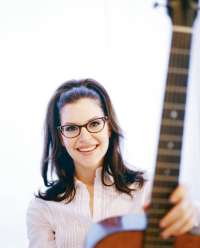 Lisa Loeb is the unknown pop star. She is best known for her 1993 Reality Bites song, “Stay (I Missed You).” This year she comes alive with her third album, Cake and Pie. The album features the best of Loeb’s introspective songwriting that unfolds before the listener. It also features the work of such industry greats as Randy Scruggs, Dweezil Zappa, Glen Ballard and Bob Clearmountain. The single, “Someone You Should Know” is catchy and addictive. For more information visit www.lisaloeb.com and look for Loeb to be touring this summer.

LL: Songwriting technique? Well first I drink some coffee with milk and sugar. It has to be hot. It has to be fresh. It’s funny because the songwriting technique changes a lot. I think basically I have moments where ideas pop into my head and I write those down wherever I can. On scraps of paper or I call myself on my answering machine. And then I sort of collect those ideas and I either sit down at some point and figure out what those ideas mean and write a song around them…The same thing happens with music. I’ll sit down with a guitar or a piano or a melody will be in my head and I’ll come up with something that is interesting to me, and if I don’t write the whole song then I’ll record or I’ll write out in music notation the idea that I’ve had. Then, at some point, I’ll write lyrics that remind me of what the music sounds like or the other way around, I write music that reminds me of what the lyrics sound like unless both come to me at the same time. And then at some point I have to sit down, just like doing homework, and just, actually, finish the song and figure out what story I’m telling and try to tell that through the music. And then the other thing in terms of songwriting technique that I think is important, and for me has changed a little bit is when I first started writing songs I think I was more influenced by old David Bowie and The Cure and The Police and even people like Jimmi Hendrix who is more known for his guitar playing, I felt like their lyric writing was something that gave you a feeling when you listened to it. It gave you a feeling but sometimes you didn’t know exactly what they were talking about. And that mystery to me was part of songwriting. I thought that was the biggest achievement. As I’ve gotten older I’ve realized what I appreciate even more is in some cases when they tell a story that I can understand. It doesn’t necessarily need to be a linear story but when they tell a story that I can understand and include some sort of poetry…not necessarily poetry but things that aren’t straightforward that give you the feeling of the song. And that’s what I’ve been focusing on even more now. And by starting to write with other people, especially writing lyrics with other people, I’ve learned a little bit more on what I’m trying to say because when you write with somebody else, when you write with another lyricist between the two or three of you, you have to decide what you’re writing about so you can actually write the lyrics. And that kind of process mentally makes you focus on what you’re going to say because in order to work together you need to be telling the same story.

FEMMUSIC: What was the biggest challenge making Cake and Pie?

LL: I think the biggest challenge was…(long pause) the business side of the album. It was working with a record company that was in transition. The actual “making” of the record was faster and easier than any record that I’ve made before. In terms of the writing and recording it was really fun. It was really inspiring. Each song…a lot of the songs were recorded and completely finished one at a time. So I was able to throw myself into each song which helped me in achieving the goal of achieving a lot of variety on the album. I think the hard part was actually getting the record out. The record company I was working with was going through a lot of transitions and I happened to be working with a lot of people who were going through those transitions. And luckily by January of 2001 I started working with Ron Fair who had just moved over to become president of A&M records. And he’s somebody I’ve worked with before at RCA records. He put my song “Stay” on the Reality Bites soundtrack. We had some success together. And I think by working with Ron, who is a musician and an arranger and a producer, we were able to really focus and get the record company more focused and finish the record. Put it out.

FEMMUSIC: What was the best experience making Cake and Pie?

LL: Oh wow! I think there were so many good experiences on the album. I think the best one was…well there were a couple…one of them was the first song I wrote with Dweezil Zappa. We wrote the song “You Don’t Know Me” and that song we wrote fairly quickly and we had a really good time writing it. We were writing about his little sister getting a boyfriend for the first time. And it was really fun. We put a lot of special little guitar parts in the songwriting part of it. And when we recorded that it was just so easy and fun and I thought the recording really captured the meaning of the song. And it just gave me a really confident feeling that the record was going to be a really satisfying project to make. It was going to be really fun.
And then another positive experience was when I did the song “Everyday” with Randy Scruggs. We had a bunch of studio musicians including Lee Sklar, who I’d played with before, and Jim Cox, who I’d played with a little bit. He’s a keyboard player. And my own drummer Ronny Crawford, and then Randy Scruggs played electric guitar. And that song was almost recorded live. The band, even though they’re studio musicians, there was so much feeling and so much…it was just a really great natural live performance. Again the speed it which that was recorded. It was just so natural. It wasn’t painful and difficult and confusing. It was just really easy and it all came together and there was really incredible playing on the record. It was fun. It’s fun when that happens.

FEMMUSIC: You mentioned earlier co-writing on this album. You also co-produced. What additional challenges did you face doing that?

LL: Well luckily, for the most part, all the people that I worked with were very open to the co-production idea. They understood that it was my record and I was the one who knew at the end what was right for me. That was good.
In a few cases here or there I worked with a producer who wanted me to change songs and things like that, and at one point, even on the single, we joke about it right now, Peter Collins and I…The reason I work with other producers, especially other producers and songwriters is to have a partner. Have somebody who I can discuss ideas with…it’s really fun and satisfying to have a partner that you can work with and discuss things with and argue about things with and come up with the best possible recording, and the best possible song. It was funny because when Peter and I worked together on the song, “Someone You Should Know” he wanted me to change some of the chords and I did rework it a little bit with my co-writer and we got it to a place where we were really happy with it. And then Peter wanted us to change some chords even more the day of the recording and I said to him, “I really, I’ve talked with Dave (Bassett) who I wrote the song with and we really don’t want to change the song. We feel good about it the way it is.” And he said to me, “It could be the difference between a hit and a miss.” I said, “You know what? Well let’s record a miss because I like it the way it is.” At the time I think he was shocked but later we laughed about it. I think we made the right decision it’s more interesting the way it is this way….

LL: I’d like it to be easier, as a singer-songwriter and a person with a rock band, to put out records more quickly. I think the trend, if you a super pop artist like Britney Spears, or N’SYNC you’re encouraged to put a record out every year. Which I guess makes a little bit more sense because, in general, the music industry, which is no surprise, that’s why it’s an industry, it’s a business, they want to sell records and those records are put together with hit songwriters and hit producers…You know it’s definitely still a performance and an art form. I’ve some of the other bands perform and they’re dancers and singers and everything. But it’s kind of a different industry I think than the people who have bands who are singer-songwriters. And I think the record industry’s mindset is still very “hit” driven. The thing is, I think people can have a sense of what might be popular. You can’t guarantee any of that. I think the tradition of being able to put records out when you’re ready to put records out whether or not they’re hit records is important to musicians as artists and as musicians. And also even on a commercial level, in terms of connecting with their fans, I think it’s important for artists to be able to put out records fairly regularly instead of waiting for the HIT. I think that’s a problem.

FEMMUSIC: What advice would you give to someone just starting out?

LL: I think a lot of people write me and ask me about what they should do. They’re just starting out. What should they do? I think that first of all you have to figure out what you want. Do you want to be famous? Do you want to be a musician? Do you want to be a famous musician (laughing). If you want to be a real musician than the best thing to do is do what you do. If you’re a singer try to get into situations where you sing a lot. If you’re a songwriter than write a lot of songs. Do what you do, and then try to build up an audience. If you’re a dance music artist than try to put together a dance music single and get those to clubs where people can hear them. If you’re a singer-songwriter than you need to go to clubs or go wherever and play for people. And then when you get to the point where you actually need a record company than go hook up with one. But focus on the real thing. Focus on the craft of songwriting, or if you’re a singer being able to sing. If you’re a musician, hooking up with people you can play with and actually PLAY. You know like I think it’s important to have a substantial life. Have something that’s very quality driven. In order to do that you need to have a lot of experience doing those things. If you want to be famous than go do something crazy in front of a bunch of people and have somebody write about it. Make sure somebody’s there to write about it, you know?