Danielle Howle and the Tantrums – Skorborealis 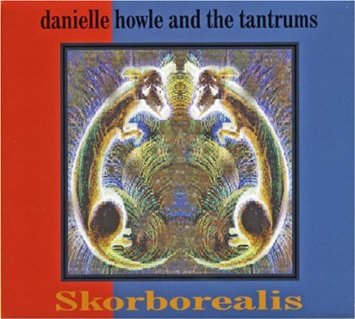 Danielle Howle’s latest release, Skorborealis, is filled with her usual quirks and sarcasm as well as songwriting talent and professional production. “Sneaky A.M.” is a perfect example, with silly, cryptic lyrics combined with powerful guitar and drum work rounding it into a wonderful, purist rock song.
The South Carolina native infuses plenty of country music into her songs as well. “Karaoke” is a down-home country spoof about a relationship created and ruined at a karaoke bar. “Let The Angels Commit” and “Conversation” are also unashamedly tinged with twang.
Danielle’s real talent is in keeping listeners exactly where she wants them. “Subclassic” and “Camero Power” intentionally conjure up images of 80’s hard rock bands like White Lion and Iron Maiden with reverbed, wailing guitars. In “Subclassic,” Danielle sings, “You know about Friday night, cover is $7.50, drinks are cheap, and the band is tight.”
Next up is the slow, punk ballad “Swamp Song” which amps up the volume just as the listener gets comfortable with the mellow pace. The bouncy “Big Puffy Girl Handwriting” talks about that popular high school girl that seems to have a perfect life and looks down on everyone else.
Her distinctive, rich voice shines on “Soft White China Patterns,” which may be the most serious song on the album. The vocals take the lead as the drums and guitar haunt the background.
Finishing the album is a slow piano-lounge jazz number, “Dark Like The Coat,” just to prove she can switch genre without a second thought. Her voice and style are very much her own and defy comparison. For more information, see www.daniellehowle.com