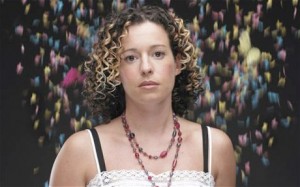 “Folk music is dead easy,” proclaimed Kate Rusby towards the end of her first set in Aldershot while promoting her recently released Little Lights CD. Don’t believe her. Mercury-award winner (roughly the British equivalent of a Grammy) Rusby merely makes it look easy.

For a woman who admitted early on that she’d be singing songs “mostly about death,” singer-songwriter Rusby certainly was upbeat.  Accompanied by a strong band of master UK musicians (Mike McGoldrick on flute and whistles, John McCusker on fiddle and cittern, Andy Cutting on accordion, Andy Seward on acoustic bass, and Ian Carr on guitar) to go along with her own voice and guitar, the evening featured a number of traditional songs, Rusby’s own compositions (which have a traditional, albeit pop feel to them), and a couple of carefully chosen covers.

It’s clear that twenty-something Rusby has been exposed to the music business for years.  A regular at folk festivals since she was a child (her father is a sound engineer), she joked about whether or not it’s child abuse to take your children to festivals. In her case, she seems to have grown from such early exposure. Her storytelling ease almost equals her singing. Each song benefits from in-depth introductions and/or commentary, even if the introduction seems tangential to the song’s meaning. Prior to “Let the Cold Wind Blow,” she told an amusing story about hearing continual thumping sounds in her living room and discovering that, in her windy environs, wrens were hitting her living room window. Now, when she sees the wrens coming that way, she opens the window so that they land on the sofa and fly away without hitting the glass. Her cover of Richard Thompson’s “Withered and Dried” strayed to a comment about the state of her garden and how she wished one of the UK’s television gardening shows would pay it a visit. Her rendition of the traditional “Wild Goose” included how, as a child, she shocked her parents by singing a rather bawdy version of it learned by accident at a folk festival. (Her parents later taught her a tamer version.) These digressions, however tangential to the songs’ meanings, were fun, intriguing, and told with the grace of an experienced storyteller.  Rusby’s Yorkshire accent (generally not noticeable when she sings, yet in her speech some Americans initially may have difficulty with it) merely added to her charm.  (While teaching the audience “The Yorkshire Couple,” she laughingly implored everyone to sing “in your best Yorkshire accents and a little louder.”)

Rusby knows how to connect with her audience. A number of songs became sing alongs. While teaching the chorus to “Botany Bay,” she explained that since its words really were just nonsense, “you could sing almost anything.”  She promised to turn her fan on the audience during the second set (the venue was warm), and she joked about the ice cream sold during the break.  (With ice cream, she stated, it’s an intermission and is posh. Without ice cream, it’s just an interval.)  She started the second set by warning everyone not to be surprised if the second half was “dead quick.”  She had ice cream to finish.

Despite all the talk (and joking about having to finish up quickly before her ice cream melted), Rusby paid even more attention to her music than to her stories and conversations. Her voice, combined with the musical accompaniment, created the quality of dancing in waves during “I Courted a Sailor.”  Her voice became melting sugar on “Let the Cold Wind Blow,” as her strong vibrato took hold.  Despite its traditional background, “The Drowned Lovers” maintained a pop feel. “The Fairest of All Yarrow” gave the band yet another chance to show its strength, and Rusby’s voice on that number can be described simply as angelic.

Whether Rusby sings traditional material or her own original songs, all are stories.  She is a storyteller in music, whether singing a cappella or with accompaniment.  She’s young, hip, fun, and relaxed on stage, singing crossover folk music with an earnest, authentic-sounding voice that only can be described as pure.  (Could that be why she named her record label Pure?)  The traditional material she covers sounds new, and it’s sometimes difficult to tell the difference between it and her own songs, whether they be the traditional themed “Sweet Bride” or the piece written for the late musician Davy Steele, “Who Will Sing Me Lullabies?”

Her cover of Iris DeMent’s “Our Town” was saved for the very end.  “I’m the only musician I know who gets homesick after two days,” Rusby admitted as she introduced it.  Both DeMent and Rusby have distinctive accents; Rusby’s Yorkshire inflection is different than DeMent’s twangy tone, and it helps give the song a more universal quality.  DeMent’s “Our Town” is no longer a town in rural America; it’s in Yorkshire, it’s anywhere, it’s Thornton Wilder’s Our Town.

“Aw, thanks,” Rusby said with a brief blush before launching into an encore.  “Do you want to come tomorrow?  We’re in… High Wycombe,” she stated, after checking on locations with the band.  Such comments may seem trite, but coming from Rusby, they’re without guile. Folk music, whether it be traditional or verging on singer-songwriter status, isn’t dead easy for most performers.  It just seems to come naturally to Kate Rusby.