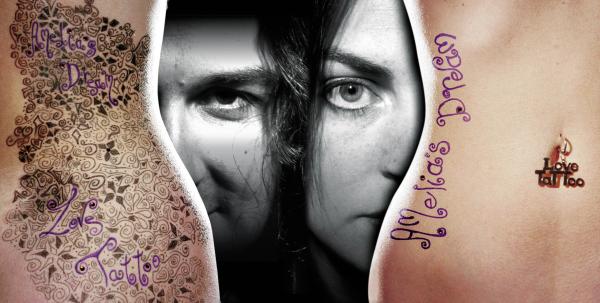 The interaction of two gifted songwriters is rare to hear in collaboration. Generally one only hears it in competition. Bands like Fisher incorporate it almost subconsciously. In the case of Amelia and Harold their own meeting spurred a relationship that produces amazing material as evidenced by their second CD, Love Tattoo.

Amelia and Harold met in a songwriting class, and named the band as a constant reminder of wanting to be recording artists. The dream is becoming reality. Joined with forces of producer Paul Umbach Love Tattoo rings with strong material including “Garden”, “Honey Dream”, “One in a Million” among others. FEMMUSIC has a quick chance to talk with Amelia. Here’s what she had to say. For more information visit http://www.ameliasdream.com

AG: Generally our “technique” is Amelia vents on the guitar and Harold takes her venting about “love, frustration, wanting women to be strong and have a great self-worth conversation” about themselves, and Harold turns it into magic. Amelia is primarily the lyricist and melody person and Harold is production, technical form and music. At times Amelia’s Dream does choose to collaborate with other writers but primarily they are self-contained. We try to bring hope to people. Which is why “Trust Your Gut” has been such a favorite among our fans and recently The Disney Channel just featured it in their TV Series In a Heartbeat.

FEMMUSIC:  What elements do you think make a good songwriter?

AG: First going with your gut. Stream of consciousness. No editing first and second drafts. The scene in the movie Finding Forester when Sean Connery tells the young writer to type without thinking, that is truly how Amelia first writes songs and melodies. Generally that’s why we try to have a tape recorder handy. Magic happens when you are least trying to create it.

FEMMUSIC: You’re CD Love Tattoo had many different evolutions. What made you decide to construct it the way it finally is?

AG: Love Tattoo originally was recorded a bit different. We scrapped a year of work. Being very interesting and talented can be a blessing and a curse. If you are talented at writing varied styles. …it is hard to not record your favorites for your fans, though it goes against the “industry” when your album is a few different styles and not one constant through out. However one of the feedbacks our fan mail says constantly is “Amelia’s Dream Love Tattoo is one of the only albums I listen to straight through because I never get bored” constant letters like that make us feel like we made the right choices. We are very diverse writers therefore we have a diverse album.

FEMMUSIC: What was the biggest challenge making Love Tattoo?

AG: The biggest challenge always is having it be what you hoped for. What you dream it will translate to from your mind and heart on to a CD.

FEMMUSIC:  What was the best experience making Love Tattoo?

AG: How happy our fans seem to be. People cry from some of the songs, they get inspired from others . That’s the best, touching people!

FEMMUSIC:  As a woman in the music industry have you been discriminated against?

AG: Not that I am aware. Since I am a little girl I have felt the opposite. Doors have always seemed to swing wide open. At least that is how it has felt.

AG: I wish upon a star it was not so purely money driven. It feels like gone are the days of “developing artists” taking chances. It feels more about business than art.

FEMMUSIC:  What advice would you give to an artist or songwriter just starting out?

AG: Have faith in yourself. If your gut says you are supposed to be doing your art, that it is your destiny, than surrender to your destiny. It is the only way you will ever feel true peace. Trust yourself. Richard Marx was rejected 2000 times in CA before he made it. He was the king of the 80’s and writes for the big boy bands now. Doors always open if you continue to knock and believe in yourself.