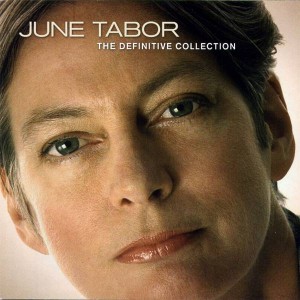 Folksinger June Tabor is ready to go into the studio to record a new album, one based on the theme of roses.  She’s pretty much been rehearsing the songs live on a late winter/early spring tour of the UK and Belgium.  This latest tour has consisted of songs dealing with roses.  The music comes from different time periods ranging from traditional English folk to German hymns to contemporary pieces.  Or, as she explained, “Welcome to — not for once — an evening about love gone wrong, but an evening about roses — and love gone wrong and gardening gone wrong.”

The first song, “Roses of Picardy,” written in 1912, had an almost music hall yet slow and bluesy feel. Tabor explained it had a special significance for World War I soldiers in that it showed an idealized love worth fighting for.  From Picardy, she moved geographically to the Isle of Jersey and sang “Belle d’Rose” in French.  Tabor later sang two songs in German and discussed the dilemma of singing a song in its original language versus its English translation. One of the German songs was a fifteenth-century German carol that had been sung in her school.  (She confessed she hadn’t sung in her school choir.  “I had a funny voice even then. I used to split octaves.”) She subsequently learned that the English translation left out bits and pieces, “so I’ll sing it to you in its original German.”  She later read aloud a bad translation of a song with words by Goethe and music by Schubert.  The translation had the audience in laughter. Again, Tabor went with the original German.

Whether singing in German, French, or English, Tabor’s voice is that of a lush, red wine.  It’s a velvety voice that takes you right to the song’s characters. It doesn’t matter whether she’s singing Les Barker’s song about Empress Josephine and her love of roses and Napoleon, a contemporary folk/popular love song by Jessica Ruby Simpson that starts “When I first loved you, I was a flower,” or “The Banks of Red Roses,” a traditional Scottish piece regarding, as Tabor termed it, “passion and worse.”  On the traditional “Barbara Ellen,” Tabor’s voice had shades that worked as accompaniment along with her band’s piano, violin, and cello.

On several occasions during the evening, Tabor stood back and turned the stage over to the band: Mark Emerson, Huw Warren, and Richard Bolton.  In keeping with the night’s theme, their instrumentals all were songs with titles concerning roses.

At the end of the show, Tabor thanked the audience for coming, listening, and “laughing at all the right places.”  Her song introductions indeed often were humorous as well as informative (she is quite a storyteller).  However, at times they were sadly topical as evidenced when she referenced foot and mouth disease while introducing “My Rose in June,” a song that she joked had her name all over it.  “Once there were fields filled with sheep — I hope there will be again.”  In typical Tabor fashion, her reference, and indeed the entire show, was subtle yet boldly effective.