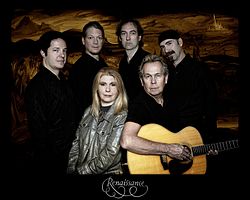 In the past few years, there almost has been a trend of bands from the ’70s and ’80s making comebacks.  Even so, it still was surprising to see an advertisement for Renaissance, the classic art rock band featuring Annie Haslam’s renowned five-octave range. Haslam would be joined by two more Renaissance stalwarts, guitarist Michael Dunford and drummer Terence Sullivan, in addition to keyboardists Mickey Simmonds and Rave Tesar, and bassist David Keyes.

The surprise, however, was welcomed by fans who eagerly queued up outside the Astoria, some of whom had travelled many miles to see a new show from a band that had broken up in the ’80s.  By the time Renaissance took the stage, the Astoria’s floor (standing only) was filling up, and the fans were restless.   The orchestral version of “Prologue” replaced the background music, and the band entered, including Sullivan in an old Renaissance t-shirt.  Haslam, the last to appear, has not strayed from her trademark “no shoes” habit; indeed, she wore tights but no shoes onstage.

An old favorite (and hit in the UK), “Carpet of the Sun,” was up first.  If there had been any questions about Haslam’s voice, they all were answered immediately.  Yes, she still hits all of the high notes in the same effortless manner as twenty years ago. Her vibrato and distinct enunciation are strong as well.  She still “feels” the songs; it’s as if she becomes one with them as she earnestly and animatedly performs.  Haslam herself acknowledged the passing years as she greeted the crowd. “It’s good to be back!” she exclaimed.  “It wasn’t that long, was it?” she asked innocently.  “I see you all look the same,” she said with a grin.

However, perhaps time has taken a little bit of a toll.  “We’d like to carry on with a song from… from…” She had to laugh as she tried to recall the album’s name.  “A Renaissance album,” she finally said as she laughed. Actually, the album was Novella, and the song was “Midas Man,” for which Dunford played a twelve-string guitar in a sort of unplugged version of the song.

“We have a new album that we recorded over the last couple of years,” Haslam revealed.  “It’s not out here yet,” she admitted, explaining that Tuscany had been released in Japan and that they were heading there the next day.   She explained that the title track, “Lady of Tuscany,” was about a musician, Paganini, who’d had an affair with a noblewoman from Tuscany.  The new song started with Haslam gradually vocalising up the scale, along to keyboards and bass.  It featured Haslam at her best — when her voice itself becomes a musical instrument — flute, oboe — as needed. The song’s start was reminiscent of Renaissance from the late ’70s and early ’80s — a rock-oriented narrative piece.  The choruses, however, switched to the early ’70s classically inspired feel.  Somehow, it seemed as if maybe there really hadn’t been that many years between shows.

Haslam introduced “another song from the album you can’t buy yet,” “Dear Landseer,” a number about a Scottish painter commissioned to paint Queen Victoria. Here was where the days when the band performed with a full orchestra were missed.  The keyboards had to fill in as flutes, harps, etc.

Overall, the band seemed to be having fun as they introduced new pieces and played popular older songs including “Northern Lights” and “Mother Russia.”  A number from Haslam’s solo career, “Ananda,” with a bit of an Indian/Middle Eastern feel that gave Haslam the chance to play more with vocal twists and trills, also was in the set list.  When Dunford introduced “Trip to the Fair,” he mentioned that he didn’t think that they’d ever played it live,  Haslam interrupted.

“Excuse me, I have,” she said with a grin, referring to her solo career.  Dunford grinned back.  “*We* haven’t,” he replied.

Closing with the band’s showcase, “Ashes are Burning,” the group certainly left behind the impression that this London show, although a warm-up of sorts for the Japanese gigs, wasn’t merely a “one-off.”  While most of the audience may have been of a “certain” age, its younger members (some with their parents) didn’t look bored.  The new songs are “must haves” for the fans, but who knows?  Maybe they will win over some young converts.  Renaissance’s musicians still have something to say, and Haslam’s voice, twenty years on, still can melt souls, and break and mend hearts simultaneously.