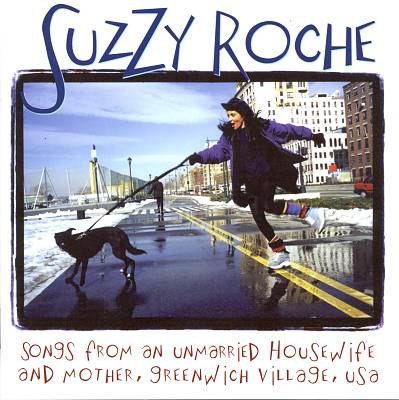 Occasionally, a singer-songwriter will record a traditional song or at least draw influences from one. But to open a CD with “Yankee Doodle”?

That’s what Suzzy Roche does on Songs from an Unmarried Housewife and Mother, Greenwich Village,USA.  The youngest sister of The Roches, a trio that’s been performing since the ‘70s, Suzzy Roche’s second solo album opens with a risk and contains a number of  pleasant surprises.

The second number, “Looking for God,” is a gentle breeze of acoustic guitars, David Mansfield’s dobro and pedal steel, and Roche’s soft vocals.  “G Chord Song” (written by Maggie Roche and including harmonies with yet another Roche sister,  Lucy) is a wry lament about how so many singer-songwriters/ folksingers tend to write the same song, or at least similar songs, over and over again.  “No Such Thing as Love” is a poignant piece that reveals the identities of two people seen on a train – in this case, a man taking a pregnant woman to her child’s father.

Roche’s voice is gentle, but it tackles the soft jazz of “Out of the Blue”  and the bluegrass feel to “When Love Comes to Town” and Jules Shear’s composition, “Cold Hard Wind,” the latter featuring both Loudon Wainwright and Shear himself on backing vocals.  Sister Maggie plays backup singer on four songs, leaving Roche fans waiting for the third sister, Terre, to accompany them – the quirky trademark Roche-style harmonies are there, particularly on “Born Yesterday.”

A folksinger at heart, Roche’s songs are miniature stories – they’re personal, honest, and emotional.   Roche varies her style from pop-style singer-songwriter to light jazz and bluegrass with everything from dobros to organs backing up her acoustic guitar, but the instruments never are overwhelming.  At times her voice may seem too pleasant; it simply doesn’t have hard edges. Even some singer-songwriter fans may want more. Songs from an Unmarried Housewife and Mother, however, is a pleasant musical experience.  The CD booklet’s cover, featuring Roche looking as if her dog is walking her instead of the other way around, is a little deceptive.  The album is filled with gentle breezes and contemplative musings rather than harsh winds and thoughts running away on a busy Manhattan street.