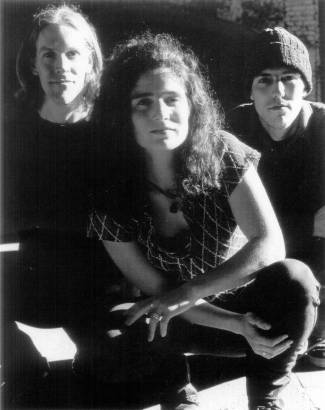 If you’ve heard of the Jazz Trio Living Daylights, then you’ve heard of Jessica Lurie. Lurie is the saxophone player with this group, and has been touring extensively with them. Lurie’s style melds well with this Trio in their CD Electric Rosary. Lurie has also done independent projects hilighting her world of influences. For more information visit http://www.livingdaylights.com

FEMMUSIC: What is your songwriting technique?

JL: Songs, I have found , can come from a variety of inspirations – a melody or bass line, or chordal structure, or often from a rhythmic idea that I then apply to a melody. I think that many of my compositions are oriented around a melody, its implied harmony and rhythm, or a melodic bass line. I usually improvise with an idea for a while to let it develop, usually coming up with additional parts and then write it down or record it to tape or 4 track without judging what it is or how it sounds. Later I’ll work to define and arrange the idea for what ever ensemble is going to play it. Sometimes I find the original idea functions as the impetus for many other ideas that are stronger and that the original part is left behind on the final arrangement.

FEMMUSIC: Your jazz style draws from many sources. Who have been your mentors and influences?

JL:I like a really big range of music, and try to be open to check out anything. One of my earliest mentors was the great George Adams who played tenor saxophone with Charles Mingus for years. He played with an amazing tone and projection that sounded like he was singing. I was fortunate to be able to take a few lessons with him while he was still alive, as well as taking some classes from Bill Barron (Kenny Barron’s brother, tenor sax) Other big saxophone influences include Ornette Coleman and John Zorn, Cannonball Adderly, Ferrus Mustafah (Macedonian Gypsy virtuoso), Roscoe Mitchell, Marshall Allen, and of course Coltrane, and Sonny Rollins. I am also very inspired by a lot of traditional music of Klezmer and Eastern European music, as well as Cuban Son and the music of Cape Verde, West African Highlife and Senegalese Soukous. The melody lines played or sung in these styles are really interesting and have really expanded my vocabulary as I figure them out on the saxophone or flute, especially the ornamentations used in a lot of Gypsy music and music from ex-Yugoslavia (Serbia, Croatia, Medjemurije).

JL: I think that Arne (bass player for Living Daylights) put it best when he said that we play American music – meaning that the music of America comes from many different countries and is evolving and changing as those influences merge. As freelance musicians we have all had to learn a variety of styles that have in turn influenced what we create. The basic tenet of the Daylights is that we can bring in whatever music we want to play- which means we have an eclectic repertoire of original music but it has a consistent sound about it from the strength of the players and our individual sounds. When I compose and when the Living Daylights are creating or arranging a song I think we are going for something in the music that we respond to as players emotionally, and hopefully the audience will go there with us and feel it too. We (Living Daylights) are really into grooves (of all varieties, odd meters included) and we like to create songs that are composed well to almost “play themselves” as well as being launching pads for improvisations that can go in any direction depending on how the band is feeling. LD has moved more into the direction of” dance-jazz” but we continue to play a fair amount of music that can be challenging to listeners and go somewhat sideways in the direction of more “out” improvisations. I feel that I am and will be alwaysin the process of finding and redefining my “sound” or “style”, and in that way I hope I won’t become stagnant. I compose a lot of music for saxophone quartet and other ensembles that is often rhythmic and groove oriented, but can be often neo-classical and be more in the style of chamber music, like some of John Zorn’s compositions for Masada, or John Lurie’s Lounge Lizards, Pachora, or Mingus. I like working with strong musicians who like to dialogue as they play and keep the music fresh by bringing their own styles to the music I write.

FEMMUSIC:  What was the biggest challenge making Electric Rosary?

JL: The biggest challenge I think was the big challenge of making any studio recording – keeping the energy of the music alive in the recording and playing one’s best. We could see each other pretty well so visual communication wasn’t hard, but a very different experience than playing live on stage and the kind of communication that happens there. In general we played “live” (simultaneously in isolation booths) with very few overdubs, even on solos,

FEMMUSIC: What was the best experience making Electric Rosary?

JL:I would say that being able to work with producer Lee Townsend and guitarist Bill Frisell was pretty great. Lee really made the record come together and have a flow. He was also very instrumental in helping make our compositions sound the best they could. Bill was just great – he rehearsed once with us and then came in and played live with us on four songs, and I think that everything he did really fit our sound and the compositions.

JL: Lower the climbing consumer price of CDs and stop the monopoly of Ticketmaster for concert ticket sales. (Okay – that is two things!)

JL: I can’t remember being specifically discriminated against. I have been fortunate in have friends and family be really supportive of me playing professionally. And even when I think my jazz chops werepretty awful, I would still receive a lot of encouragement to keep practicing and playing. I am excited to see more and more young girls take up instruments that were typically played by boys. It is still strange to play at a big jazz festival and realize that there are only 10 female players (instrumentalists/vocalists) out of a roster of 200, the rest being men. It would be great if concert and festival programmers took a more active role in booking women players/groups. I think that there is still a fair amount of sexism in the music industry, although it seems to be slowly changing for the better.

JL: Play (with other people) and practice as much as you can, write out your musical ideas regularly, and check out many different kinds of music – be open to the diversity of music/noise/sound that is out there.