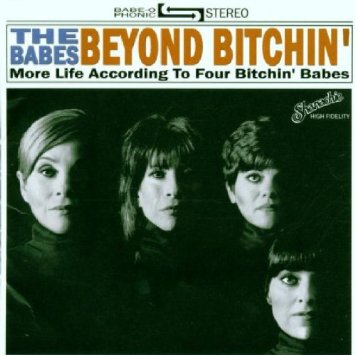 Created by singer-songwriter Christine Lavin in 1990, the Four Bitchin’ Babes have evolved through various line-ups (including such folk music stalwarts as Janis Ian, Cheryl Wheeler, Kristina Olson, and Mary Travers), and Lavin herself has left the band. However, the current line-up of Sally Fingerett, Debi Smith, Megon McDonough, and latest addition, Camille West, have turned out a convincing CD with Beyond Bitchin’.

Since all four artists have their own performing careers away from the Babes, a Babes CD is almost like a music sampler, but it’s so much more. While the general set-up is that each member sings lead vocals on her own compositions (or chosen covers), all of the women join in on harmony and backing vocals, creating delightful, yet unexpected, combinations. For example,

Smith, whose recordings with the Smith Sisters feature guest appearances by bluegrass artists such as Doc Watson and Sam Bush, sings backing vocals on West’s comedic “Viagra in the Water.” It’s not what Smith’s fans might expect, but it works. More typical of Smith, however, is the CD’s opening number, “Little Stars.” T-Bone Wolk’s mandolin lends to the contemplative mood and slight bluegrass feel in a song that brings up the intuitive connection between humans and the heavens.

West, the comedian of the bunch, contributes two funny songs and one very serious piece. Reminiscent of founder Lavin, who can make her listeners laugh in one breath and cry in the next, West’s first piece, “Toe to Toe with the HMO” suggests Lavin’s influence in the opening beats. As the song progresses though, it’s clear that West, with her throaty alto, is her own woman.

“Lovely Mistake,” one of Fingerett’s offerings, clearly places her in the top echelon of singer-songwriters. Megon McDonough’s soulful “The Body is a Car” (with Wolk contributing on both mandola and banjo that blend well with the guitars, keyboards, and McDonough’s djembe) pits heartfelt yearning with discreet advice.

Sadly underrated as individual artists, the Babes shine together. Of course, they’re beyond bitchin’. What’s the need?