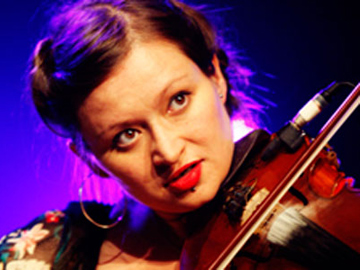 “We used to do mainly traditional folk,” Eliza Carthy announced towards the end of her recent London gig. “We don’t anymore,” she said with a giggle. “Something got lost along the way.”

Well, perhaps changed is a better word than lost. However, it is true that Carthy, daughter of traditional English folk stalwarts Martin Carthy and Norma Waterson, recently released *Angels and Cigarettes*, her first all pop/rock-oriented album ona “big-time” label, Warner Brothers. Carthy has made the transition from traditional folk to pop/rock witha singer-songwriter edge.

After a late start and American singer-songerwriter David Mead’s opening act, Carthy and her band took the stage. Four men and two women backed her on accordion, violin, acoustic guitar, drums, bass guitar, keyboards, and backing vocals. (Carthy herself moved back and forth between violin and keyboards.) She opened with “The Company of Men,” a provocative number from the new album. (With a first line that states “I’ve given blow jobs on couches/to men who didn’t want me anymore,” it not only grabs attention but also makes it clear that Carthy’s show will not highlight traditional folk music.) Unfortunately, the sound system wasn’t quite warmed up yet, what with sudden feedback disrupting what otherwise is a slow, dramatic song.

Carthy didn’t talk much between numbers. She confessed early on that she was trying to save her voice. (At one point she asked if anyone had a lozenge.) “I’ve had laryngitis,” she admitted. “I’m sure I sound pretty husky. I’ll be doing my Tom Waits imitation by the end of the show.” Her voice, albeit a mite deeper than usual, still was it usual velvety self.

To help save her voice, though, most of her introductions were quick and sly one-liners. “This is a song about whispering,” she announced before breaking into the CD’s opening number, “Whispers of Summer.” With a sound slightly reminiscent of The Corrs, Carthy played violin while singing – a feature rarely seen; her voice managed to maintain its strong vibrato the entire time. “Train Song,” a very seductive number, was introduced with a smile as “a song about being a pervert, of which I know nothing.” Violins and accordion gave it a traditional feel, while its rhythm beat out contemporary, luscious notes. Carthy played neither violin nor keyboards for “Whole” (introduced as “a song about holes”) and was able to play the pop star dancing at the microphone with her blue hair swinging and her glittered face shining.

While she mostly performed her own compositions, she also sang a couple of covers. Almost apologetically, she mentioned that this “is a song I didn’t write” before launching into Ben Harper’s “Walk Away”(featured on Red Rice, an earlier album). Her take on the song, while different than Harper’s, was quite effective. Her Yorkshire accent came through on the vocals, the synthesizer was emphasized, and Heather McCloud, her back-up singer, created a nice vocal unison.

She also covered Paul Weller’s “Wildwood,” which allowed her to return to her violin. Like “Walk Away,” it also featured nice work with McCloud. It’s a song that requires a lot of voice, which she had. It’s amazing that she even attempted it with laryngitis. Her vocal qualities on this piece made her short introductions and lack of between-song patter worthwhile.

Carthy’s new sound indeed places a lot of emphasis on her voice, which, even with laryngitis, was up for it. Anyone wishing a traditional folk performance might have been disappointed. (Carthy did perform one traditional song, “Adieu, Adieu,” but even it was a raucous, fun folk-rock number with emphasis on the rock.) She hasn’t lost anything; she’s merely made a change. Now, if only she’d play less smoke-filled venues in the future…