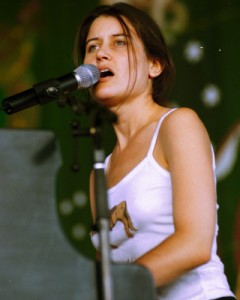 “I’m your opening act,” Jill Sobule stated as she matter-of-factly introduced herself and strapped on her tiny guitar. However, it was a false start. “I’m not plugged in!” she cried.

Colorado native Sobule, although promoting her new CD, Pink Pearl, opened with an older piece, “The Jig is Up.” She stopped mid-song to inform the audience that her parents “both went to school here – just to let you know. My dad was a veterinarian,” she added in reference to Colorado State University’s veterinary program. She also intimated that she too might have become a vet had she not spent too many summers cleaning out cages in her father’s office. Luckily for the adoring fans in the crowd, the sharp-edged, witty Sobule went into music instead.

Her cynical humor expressed itself in her second number, “Heroes,” from the new CD. It’s a song about how the people she idolized when she was a kid turned out to be “mean, awful alcoholics.” The audience started laughing with lines such as “Why are all our heroes so imperfect” and evidence including “William Faulkner — drunk and depressed, Dorothy Porter — drunk and depressed.” Sad subject matter? Not with Sobule’s humorous tone.

Sobule was on that night, whether performing new material, her “mini-hit” (as she termed it), “I Kissed a Girl,” ‘80s anthems (she broke into “All the young dudes/carry the news” at one point), or a new, not-yet recorded song about the death penalty with its chorus: “You’d better not kill in Texas; they’d just love to kill you.” The Colorado audience roared with laughter at these lines: “You can get off in Boulder, Colorado, but they’ll fry your ass in Lubbock.” Sobule was delighted at her chance to sing an encore. “I never get encores!” she exclaimed.

Her energy and the crowd’s reaction paved the way for Paula Cole’se ntrance. Cole made her way to center stage in front of a full band including long-time band mates Jay Bellerose on drums and Kevin Barry on guitars, along with Doug Wimbash on bass and Rockiya Diggs on piano, keyboard, violin, and backing vocals. (Cole played piano and keyboards on only a few numbers; she instead focused on her vocals and audience.)

Self-described as a frustrated drummer, Cole’s right arm went wild as if she held a tambourine in it on her opening number, “Happy Home,” from Harbinger, her first release. She followed it with the title track of her latest album, Amen, which expresses Cole’s new-found spirituality. This album, unlike her previous two, has not been a success. In fact, Cole thanked the audience “for supporting us even though there’s nothing on the radio.” “Amen,” however, demonstrates that while Cole is spiritual, she still is as radical as ever. In her list of items for which to say “amen,” she included “Dr. Kevorkian and the right to die” and “the Republican Witch Hunt Crew.”

The set list pretty much revolved between old (mostly songs from her second CD, This Fire) and new material. The new music tends to be more rock-oriented and leaning towards a funkier theme (and in the case of “I Believe in Love,” a twinge towards the ‘70s soul sound). Unfortunately, due perhaps to the sound system, Cole sometimes was overwhelmed by the band. It was difficult to discern the lyrics to the newer songs if you didn’t already know them. Cole’s trademarks cat-like ad libs were prominent, but while they felt earnest, at times they seemed almost over the top. Other than that, she was in good voice. Despite the sound dilemma (there were occasional feedback problems on vocals, particularly on “Carmen”), the audience seemed enamored, and Cole appeared quite pleased with the response. While Cole didn’t talk much with the crowd, she certainly wasn’t shy. Clad in a short slip dress, she was not afraid to exude her sensuality while revealing emotion on stage.

While Cole’s expressive sensuality may not have been startling for the crowd (she did perform “Feelin’ Love,” a rather evocative song from This Fire that also allowed Barry a long solo), she did introduce some surprises. She brought on a guest musician to sing, dance, and play drums for one new number. She became a female Robert Plant as she covered Led Zeppelin’s “Black Dog” as an encore and made joyful pirouettes onstage in platform shoes. However, her next-to-last encore, “Hitler’s Brothers,” became a rocker in concert and a real crowd pleaser, and the finale, “I Don’t Want to Wait,” helped the crowd mellow out a little and prepare to exit. “Crowds like you make it all worth it!” she exclaimed. “This is what it’s all about.”

Indeed, Cole truly seemed to enjoy herself, and the crowd definitely was appreciative. Despite sound difficulties and changes in her musical style, the hungry audience ate it up. It certainly was worth it to them.