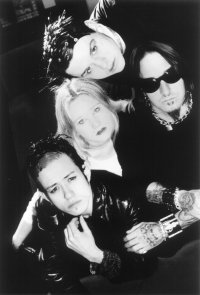 The Coal Chamber/ Type O Negative Road Rage Tour is charging across the nation. Rated one of the best tours by Pollstar, this tour features the original, creative band Coal Chamber. Following on the heels of their debut release Chamber Music (Roadrunner Records 1999), The Road Rage tour promises to keep the interest focused squarely on Coal Chamber. For more information on Coal Chamber visit http://www.coalchamber.com

FEMMUSIC was able to get a few minutes with Rayna Foss-Rose, the bassist Coal Chamber. Here’s what she had to say

FEMMUSIC: How did you first get interested in music?

RLR: Actually a friend of mine gave me a bass, and I just started messing around with it. I enjoyed playing it, and auditioned for Coal Chamber about six months later, and the rest is history.

FEMMUSIC: Who have been your biggest music influences?

RLR: I would probably say John Taylor from Duran, Duran. Old Badbrain, The Cure, Metallica. Probably those four are my biggest musical influences.

FEMMUSIC: What was your best experience making Chamber Music?

RLR: What was the best experience?

RLR: Probably the whole overall experience. We did the record up in Longview Farms up in Boston, and were secluded from the rest of the world. It was just the band and we got a lot of work done there and we had a good time doing it.

FEMMUSIC: How long did it take?

FEMMUSIC: How has this tour been?

FEMMUSIC: Have you had any memorable experiences with it?

RLR: We’re having just great shows. Nothing extraordinary as happened or anything. The shows have been really good. We like touring with Type O. It’s a great touring band.

FEMMUSIC: As a woman in the music industry, have you ever been discriminated against?

FEMMUSIC: What are your goals for the future? Where do you see yourself in five years?