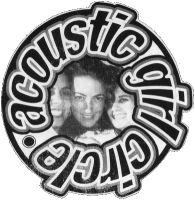 The Acoustic Girl Circle is the creation of Marilyn D’Amato, the lead singer of Marilyn 5. Originally started in 1997, this group of three women has been playing the New York City area and recently finished a European tour. Next up is a CD.

FEMMUSIC caught up with Marilyn as Hurricane Floyd hit the East Coast.

FEMMUSIC: You’ve been performing for many years. When did you know that you wanted to pursue music professionally?

MD:  When I was 8 years old, my dad bought me a guitar…and that was the end of it.

FEMMUSIC: Who have been the biggest influences on your music?

MD: Growing up I listened to whatever my older sister listened to which was anything from Led Zeppelin to old Rod Stewart – but as I got older, I gravitated toward the Pretenders, Prince, Suzanne Vega. Wow how can I forget the Go-Go’s! They were so inspirational to a 13 year-old girl… The past few years though, Ani DiFranco has been really inspiring.

FEMMUSIC: Describe your songwriting process? How do you come up with your songs?

MD: The songwriting process for me doesn’t really have a set formula.   Sometimes the lyrics will come first, sometimes the music – At times I will have a Line or chord progression I really love and work off of that. Some songs seem to write themselves, while others take more work. But I think melody is key. I am a sucker for a great melody and think that that is the most important thing in a song.

FEMMUSIC: What has been your best experience since you’ve been playing out?

MD:  My greatest experience has to be performing with Sarah McLachlan at Bearsville studios when she was kind enough to sing backup vocals on one of my songs. What an honor and a thrill! Imagine sitting there trying to sing with Sarah right next to you… I also loved performing at last year’s SLAM! opening for the Indigo Girls to a sold-out crowd at Irving Plaza – when I walk out on that stage, i knew this is what i should be doing… but although I’ve been fortunate to share stages with some of my favorite artists, small victories are great too, some of my best memories are performing with my peers in  NYC’s little clubs.

FEMMUSIC: The Acoustic Girl Circle was a novel idea when it began in 1997. Why did you start it?

MD: I had so many talented friends, and we were all separately doing our (own) thing. I thought it would be great to perform together for fun.

FEMMUSIC: What obstacles did you encounter when first starting the Acoustic Girl Circle?

MD: There weren’t any real obstacles, except that some people i knew wanted To be included and felt left out – (but the stage at the bitter end was only so big.)

FEMMUSIC: How did you come up with your current line-up of the Acoustic Girl Circle? Do you anticipate bringing in other members?

MD: The original lineup was myself, along with Trina Hamlin, NiNi Camps (of LOVEPIE) and the great and witty Julia Douglass, later replaced by Leslie Nuchow.  My original intention was to have a rotating lineup… but it never happened.

FEMMUSIC: What has been your most memorable experience with the Acoustic Girl Circle?

MD: There have been lots memorable experiences, but touring Europe and the East Coast of the US this past spring was a blast.

FEMMUSIC: What do you see in the future for the Acoustic Girl Circle?

MD: We are trying to figure that out right now. Whatever it is will be interesting… stay tuned 🙂  although I can say that I want it to have the energy of our live show.

MD:   Well, the whole record industry is in such flux right now, that I think the climate out there is great for independent & emerging artists. It’s a great time to take risks. The majors tend to underestimate the intelligence of the public. I think people are hungry for great music and are ready to hear more variety.

MD:  Do it because you love it. Remember to have fun and not to take the industry or yourself too seriously.. and wear comfortable shoes.

MD: Support local music! (Oh yeah, and visit the mod music website at http://www.modmusicrecords.com – a little record company I started with 3 other partners)